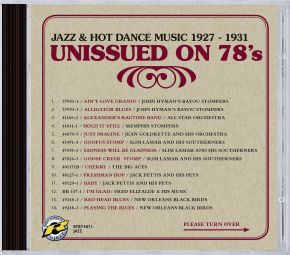 Let’s make it plain from the start. “Unissued on 78s” means just that, no more, no less. Some of the tracks on this CD have been issued on LP, some even on CD (maybe more than I know of), but none were ever issued on 78s and quite a lot are seeing the light of day for the very first time.

John Wigginton Hyman was born in New Orleans on 25th July 1899 and died there on 9th October 1977. After working as a violinist in New York he returned to New Orleans around 1925 and played cornet with such bands as those of Tony Parenti and Ellis Stratakos. His two numbers, made on a visiting mobile recording machine, were his only recordings for many years, because he left music in the 1930’s to become a school teacher. He started playing again in the late 1940’s as Johnnie Wiggs and became something of a local celebrity with lots of broadcasts and recording sessions to his credit before he more or less retired around 1960. The record reveals a thoroughly fine little ensemble directly in the white New Orleans tradition, albeit the musicians had obviously been listening to the latest sounds from the Red Nichols camp in New York, notable for some early work by Bob Crosby’s stalwart guitarist Nappy Lamare and drummer Monk Hazel. These are alternate takes to the rather rare original issue.

Under the label of the ‘Alexander’s Ragtime Band’ All Star Orchestra test pressing can be seen scratched into the wax “The Fud and Farley Orchestra”. It’s an interesting arrangement, almost certainly by Fud Livingston and why it remained unissued is something of a mystery as it’s very well performed and recorded. Despite the reference books, there is no vocal and no obvious place in the arrangement where one could be inserted. We next have two numbers, in both cases alternate takes, by the rather obscure Snooks Friendman and the Memphis Stompers. No well known names in the line up, but the sort of fierce drive that was a characteristic of many of the Tennessee territory bands is well in evidence. It can also be heard in the other Memphis recordings on this CD made by Slim Lamar, Mart Britt and Sunny Clapp. Several of the musicians involved here are in more than one of the bands, notably clarinetist Sidney Arodin, trumpeter Tony Almerico and trombonist Blue Steele. Numbers like ‘Goose Creek Stomp’ and ‘Come Easy, Go Easy, Love’ are outstandingly hot performances by anybody’s standards. “Just Imagine” by Jean Goldkette’s Orchestra has been the subject of some speculation down the years because of the supposed presence of Bix Beiderbecke. To my ears there is no reason to doubt that the obligato to Greta Woodson’s (who was she, does anyone know?) vocal on the issued Take 4 is by anyone other than Bix disciple Stirling Bose. Take 5, presented here, will not help to clarify the matter as the obligato is missing.

The Dorsey Brothers Orchestra had just finished a recording session when Don Reidman and George Thomas from McKinney’s Cotton Piekers came into the studio bringing a new song by Redman entitled ‘Cherry’. The Dorsey’s were so taken with it that they promptly put together a group using some of their men with Redman and Thomas and recorded 3 takes. Take A was issued on Okeh, English Parlophone (also re-issued later) and various other Okeh related labels.

A limited number of copies of Take C surfaced on the first English issue but Take B has, so far as I am aware, never appeared till now. It’s a minor classic, but it is hard to see why 3 not widely differing takes were made when the first was fine. Interesting too as a quite early example of a mixed race session, notably instigated by the musicians rather than the studio.

Jack Pettis was a leading C melody sax player througout the ‘20s, particularly with Ben Bernie’s fine band. He also led a number of “pick-up” recording sessions which produced some excellent music, often using colleagues from the Bernie outfit augumented by some stellar names. He seems to have had a close business connection with music publisher, entrepreneur and occasional vocalist Irving Mills who was certainly responsible for setting up both of the recording sessions from which the tracks on this CD originate. As always, Mills’ intention was to plug the copyrights that he owned. He had recently published the score from the major Broadway hit musical “Blackbirds of 1928” and “Baby”, was introduced in that show by the wonderful Adelaide Hall. “Freshman Hop” was a Pettis collaboration with pianist Al Goering and was a moderate success at the time. Both are presented here in alternate takes and romp along very happily. The second Pettis led session was something of a mystery for many years. Four titles (all Mills’ publications) were recorded but only one, the well-known “Bugle Call Rag”, was issued at the time. Clarinet on this was obviously by Tony Parenti, but various people, including Parenti, insisted that no less a major name than Benny Goodman was also on the date. In 1990 Retrieval were able to issue the 3 missing titles and lo and behold, there was Benny in all his glory. And here he is again now.

A few years ago that indefatigable British collector Max Easterman acquired an unissued item by Fred Elizalde and his Music. In characteristi- cally generous fashion he allowed Nick Dellow to issue it on his own CD label in a limited edition. Now the equally generous Nick (with Max’s approval) has agreed that “I’m Glad” is far too good to languish unavailable and has duly given Retrieval permis- sion to re-issue it on this CD. We’re glad!

The New Orleans Black Birds was yet another Irving Mills organized pick up date intended to plug his copyrights. A stellar group featuring Phil Napoleon, Jimmy Dorsey and Miff Mole make happy music together and we are happy to present the alternate takes of this fine pair of titles. Back in the 1960’s I was (amongst many other jobs) compiling the Parlophone Jazz Classics LP Series. I remember clearly how excited I was to discover that amongst the pitiful handful of Okeh masters that survived at EMI’s Hayes factory were not only the incredibly rare non-vocal takes of Miff Mole’s “Navy Blues” and “Lucky Little Devil” (originally issued in min- ute quantities on the short lived US. Parlophone and Odeon labels) but also alternate takes for these two titles. I issued them then, but that’s nearly half a century ago. Time to make them available again. Boyd Senter, ‘The Jazzologist Supreme’ as he billed himself, played very bad trumpet and almost equally awful alto and his singing was terrible even by bathtub standards. His clarinet playing, though very definitely, of the “gaspipe” variety, sometimes showed signs of genuine jazz feeling and his 1930 Vic- tor sessions produced some good Dix- ieland style music. Why “Way Down Yonder in New Orleans” remained unissued we will surely never know, but we are very happy to present it to you now.

Bix Beiderbecke’s last session under his own name was hardly his best work. Chronic alcoholism was taking it’s toll. However, if like me you believe that any Bix is better than none, then the first take of “Deep Down South” will be a welcome addition to your collec- tion. It’s a star studded group and this take has, I believe, only been available briefly on LP many years ago.