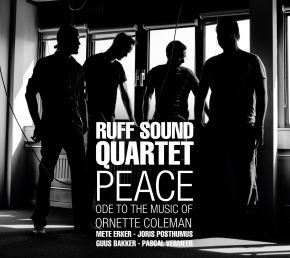 Peace - Ode to the music of Ornette Coleman

The American saxophonist Ornette Coleman was one of the important founders of the free-jazz movement at the end of the 1950s. His musical approach was less rigid compared to be-bop musicians. He searched for new forms of improvisation and musical freedom. With HARMOLODICS he moved beyond the restraints of the harmony and form of be-bop and came up with a more raw and intuitive music, less academic and focused more on energy and emotion.

Half a century later the musical ideas of Ornette Coleman have lost nothing of their power; they are still a source of inspiration for many musicians. Early in 2009 the RUFF SOUND QUARTET was formed, initiated by drummer Pascal Vermeer. The quartet plays various Ornette pieces from the ‘60s. Freely using the improvisational possibilities this chordless music offers, anarchy and adventure blossom.
After a few successful concerts, the Ruff Sound Quartet went to Osnabrück, Germany to record their first CD at the Fattoria Musica Studio with sound technician Chris Weeda. All recordings were done live, in one room, without any overdubs.

On ‘Peace, Ode to the music of Ornette Coleman’ you will find five of Ornette’s compositions and one of Charlie Haden with three originals by members of the quartet.

21-03-2013 Jazzflits
""Behind this relatively unknown band name hides much more than appearance suggests. Yet not fifty minutes of music is just too short for much talent""
01-01-2013 Jazzism
"This album could even win a price or a similar recognition."