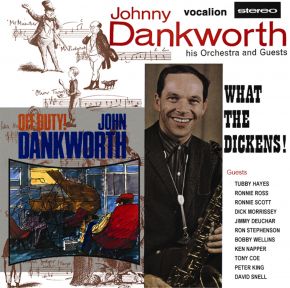 What The Dickens! & Off Duty!

The late John Dankworth (1927-2010) made a string of recordings in the 1960s that have since come to be regarded as some of the finest British jazz albums of their time. Following Vocalion’s previous Dankworth reissues (2CDMSL 8480 & 2CDSML 8484), this third volume excavates a further two albums from the Fontana/Philips vaults and presents them remastered from the original stereo tapes. 1963’s literary-inspired jazz suite What the Dickens! saw Dankworth painting musical portraits of several of Charles Dickens’ best-known characters. And with a band containing a wealth of world-class players – the sax section alone consisted of Ronnie Scott, Tubby Hayes, Pete King, Dick Morrissey and Bobby Wellins – the jazz on offer here is of the highest order. Dankworth turns in some truly inspired compositions, enabling the entire suite to gel into a coherent whole, and the result is one of the most satisfying albums in his extensive discography. A very different facet of Dankworth’s musical persona is on display in the Off Duty! album, which was recorded at the end of the 1960s when the influence of pop and rock on jazz was at its height and instruments such as the bass guitar started to be incorporated into jazz’s vocabulary. “… over the past few years I have been required to do a number of sequences in the films I have scored that involve dancers on the screen,” Dankworth explained in his LP sleeve note. “The music has therefore had to be that of the present day but unmistakably mine. Thus, almost subconsciously a Dankworth ‘pop’ style evolved, which has intrigued me ever since its enforced inception.” The Dankworth ‘pop’ style – in fact more of an even marriage between jazz and pop – is created here thanks to the ingenious arrangements of John Dankworth plus one each from regular Dankworth collaborators David Lindup and Laurie Holloway. Featured on bass guitar are two of Britain’s finest on the instrument, Brian Odgers and Herbie Flowers, both of whom create the necessary solid foundation for these invigorating jazz-pop hybrid renditions of familiar tunes including Skyliner, Basin Street Blues, Don’t Get Around Much Anymore, Sophisticated Lady and Bernie’s Tune.
Remastered from the original stereo master tapes.