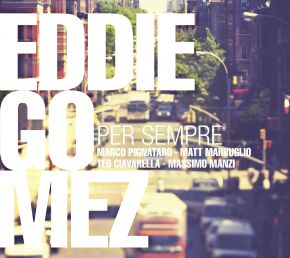 This album was recorded in Bologna, Italy while on tour in the winter of 2010.  The music during the tour was a joy on so many levels; artistically, as well as the friendship that evolved.  This camaraderie was evident in the music, as it should be.  We all agreed to chronicle a part of this musical odyssey, and so we went into the studio.  Our instincts did not fail us.

I’m ever so grateful to Marco for his great sound, compositions and input and commitment to the project.  Matt is one of the great flute players of our time.  He is a real discovery for me. His writing is also very special.  Teo brought a profound spirit to this recording, and of course his jewel of a melody dedicated to his daughter 'Ariana'.  Massimo is one of a few drummers who plays with a deep sensibility and awareness of music. A gem.

Eddie Gomez (artist)More information
01-01-2013 Jazzism
"The group members circle each other, probe with caution and react to the smallest subtleties. Wonderful album.
"