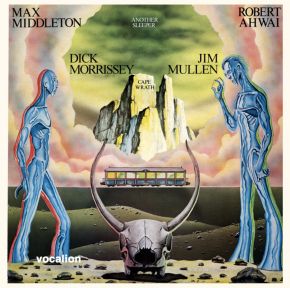 To many, the jazz-funk idiom is strictly the preserve of American musicians and groups such as Lonnie Liston Smith, Bob James, George Benson and The Crusaders. And while there is a certain truth in that, let us not forget that in Britain at the end of the ’70s there too was a thriving jazz-funk scene, which came to be spearheaded by bands like Shakatak and Level 42. This Vocalion reissue presents two albums from the Harvest archives – EMI’s progressive music label – both of which proved to be high watermarks in the first wave of British jazz-funk. c. Middleton had previously appeared on guitarist Jeff Beck’s landmark album Blow by Blow and later was a member of Hummingbird, the soul band formed by Beck’s vocalist and fellow guitarist Bobby Tench, and which Robert Ahwai also later joined. There’s a lovely, romantic L.A./West Coast sound – though with a uniquely British sensibility – about much of Another Sleeper’s music, particularly on the flowing grooves of Robert Ahwai’s upbeat Dance by the Light of the Moon and Max Middleton’s Partial Eclipse/Total Madness, where Fender Rhodes piano and lush string arrangements combine to wonderful effect. Another Sleeper is partnered by Cape Wrath, the second album from Morrissey-Mullen, which became one of the UK’s most successful jazz-funk groups of the 1980s. Cape Wrath was also recorded for EMI’s Harvest imprint and featured many of the musicians who’d appeared on Another Sleeper, including Max Middleton and Robert Ahwai, which helped to give a pleasing consistency of ‘feel’ and style across both albums. Alongside original compositions from tenor saxophonist Dick Morrissey (Return to Tooting Broadway) and guitarist Jim Mullen (Cape Wrath and Night Song), soul and jazz evergreens such as Bill Withers’ Lovely Day and Mal Waldron’s Soul Eyes are given heartfelt jazz-funk arrangements. If it does nothing else, this release shows that, at its best, British jazz-funk was easily the equal of its American counterpart and indeed had an identity and sound of its own. Remastered from the original stereo master tapes.