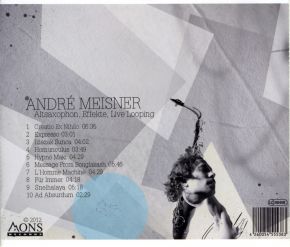 Creatio Ex Nihilo" - born out of nothing. The opening statement on André Meisner's concept album "Kreatur" refers to the creation of the album and is simultaneously true and untrue. It is true because the idea for the project appeared so abruptly in Meisner's thoughts; it is untrue because this flash of thought was preceded by an intense, almost philosophical examination of human, machine, electronic and saxophone elements, with all of their differences and intrinsic connections. The pivotal concept is the idea of a creature, half man/half saxophone, which tells its own story and treads its own path... Ending with "Ad Absurdum" the creature, through its bare existence, poses more questions than it answers, and constantly drives toward new challenges.
Between these two pieces, an album has been created which breathes colour and lightness. Completely from the heart and full of sensuality, André Meisner plays around with 1001 options, and provides a fusion of electronics, loops and effects with a "real" hands-on and "earthy" sax sound. He moves with a sleepwalker's surety that allows him to shine as both a "techie" and a virtuoso saxophone player.
With "Kreatur", André Meisner has succeeded in creating a solo project which impressively demonstrates how standard saxophone playing can be blasted into the light of the 21st century.