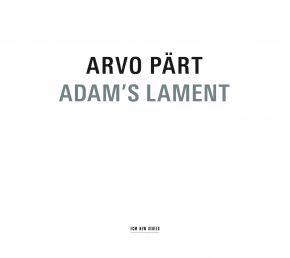 Marshalling orchestral and choral forces under the direction of Tõnu Kaljuste, this new Arvo Pärt album, produced by Manfred Eicher and realized, like all Pärt’s ECM discs, with the composer’s participation, is a major event. Sacred music predominates, by turns monumentally powerful and tenderly fragile.

The main piece, Adam’s Lament for chorus and orchestra was commissioned by the cultural capital cities Istanbul and Tallin in 2010 and 2011. It is based on writings of Saint Silouan (1866-1938), in which the Russian Orthodox monk on Mount Athos describes Adam’s pain at the loss of Paradise.

Pärt has spoken extensively of Adam’s importance to St. Silouan and to himself: “The name Adam is like a collective term which comprises humankind in its entirety and each individual person alike, irrespective of time, epochs, social strata and confession. We could say that he is all of us who bear his legacy and we, Adam, have been suffering and lamenting for thousands of years on earth. Adam himself, our primal father, foresaw the human tragedy and experienced it as his personal guilt. He has suffered all human cataclysms, unto the depths of despair.”

Adam’s Lament is complemented by a number of older choral works which Pärt reworked, including Salve Regina, originally for organ and chorus, commissioned for Hubert Luthe, Bishop of Essen Cathedral in 2001. 10 years later, Pärt reworked it, along with two other pieces recorded on this CD, Beatus Petronius and Statuit ei Dominus from 1990, for choir, string orchestra and woodwinds. Pärt wrote of the works: “The feathery lightness of Beatus Petronius and, by contrast, the potency of Statuit ei Dominus are two sonic worlds, like the two sides of God, which I tried to touch, to trace in these works. It is difficult for us to fathom God – in terms of both his greatness and simultaneous infinite benevolence.”

L’Abbé Agathon (2004-2008) is another weighty piece on this recording. Scored for soprano, baritone, female choir and string orchestra, it was originally a commission from the cello octet in Beauvais, France. Near the city are the remnants of St. Lazarus Hospital, the oldest hospital for lepers in Northern Europe, dating back to the 12th century. Pärt took the legend of St. Agathon in which he exchanges his body with that of a leper. “Three musical situations dominate the piece: the way to the market, with Agathon’s heavy gait with the leper on his shoulders, the dialogues between the lepers and Agathon, and the life at the market.” According to the legend, Agathon carried the leper on his back and fulfilled his every wish until he discovered that, in reality, the leper was an angel sent by God to test him.

Two short pieces round off this CD of choral compositions: the Alleluia Tropus (2008-2010) and Two Lullabies (2002/2006). According to Pärt, lullabies are like little pieces of lost Paradise: “A small consolation combined with the feeling of profundity and intimacy. I wrote these two lullabies for adults and for the child within every one of us.”