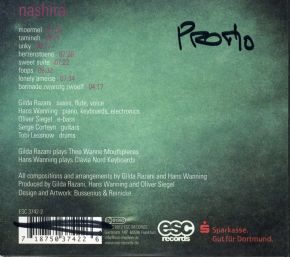 Saxophonist Gilda Razani and pianist Hans Wanning with her compositions form a unique highly atmospheric sound. In their compositions they mix jazz, romantic, avant-garde, rock and electro. Velvety floating melodies of almost casual serenity, sparkling solos, powerful moments of hypnotic force determining the sound between relaxed meditation and breakneck dramaturgy. Poetic, imaginative and experimental override Gilda Razani and Hans Wanning light-heartedly about genre boundaries and create moving and beautiful soundtracks, which includes fine dia-logues. With the CD "Nashira" Sub.Vision now published their third CD production. The title of the album on the one hand is the name of only about 139 light years from Earth Star. On the other hand means "Nashira" in Arabic, "which brings the good news." The compositions of the tracks are inspired by little scenes of everyday.

Gilda Razani saxes / theremin . Born in Tehran / Iran. She studied saxophone in Det-mold/Germany. She played in the National Youth Jazz Orchestra and played with and by Karl-Heinz Stockhausen's work "star sound". In addition, Gilda Razani worked e.g. with John Lee, Trilok Gurtu, Roy Assaf, Thomas Alkier, Max Raabe, Selim Sessler and played with the Helmut Zerlett Band in the German television at the Harald Schmidt Show. She is a member of the jazz band 'The-Dorf'.With Sub.vision she toured in Italy, Netherlands Poland, Lithuania and Estonia, and played at many festivals.

In 1988 he was a prize winner at the "European Jazz Contest" in Brussels. His mayor projects were: HWT, Bescay, Stardust and Memories (a collaboration with the "Modern String Quartet"). As a sideman he played with Gerd Dudek, Ramesh Shotham, Rosani Reis, Ulli Beckerhoff, Thomas Alkier.

Serge Corteyn / guitar. studied in Arnhem/NL at the Academy of Music and played guitar in a rock band 'unknown Pleasure' and for 'Obst Obscure'.
Tobi Lessnow / drums. studied at the "Hogeschool voor the Arts" in Arnhem, NL.