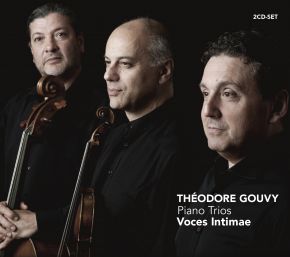 When Alexandre Dratwicki, Scientific Director of Palazzetto Bru Zane - Centre de musique romantique française - told us about Louis Théodore Gouvy, the name was completely new to us. Balancing our interpretations of the Great Composers with the discovery and evaluation of lesser known composers has always been one of our main objectives and, with this in mind, we have already dedicated a lot of time to Hummel. He at least was a known composer amongst the first Romantic Virtuosi, whereas investigating Gouvy was just a vague idea, but one that turned out to be extremely stimulating. As soon as we started analysing his music, we realised that it was yet another example of an important composer that has unjustly been ignored. The fact that he was born in an area that historically has frequently changed hands between France and Germany (he only became a French citizen at the age of 32) partly explains his struggle to fame, but it enabled him to develop a unique style. He mixed the solidity, potency and richness of the Romantic German Structure with the unusual inventiveness, the bubbly curiosity and cosmopolitan variety of French Music and Culture of the second half of the 19th century, all combined with a romantic instrumental virtuosity and the irresistible and unquenchable passion for the world of opera. He captivated us in particular with his thematic inventions, his superb knowledge of harmony and instrumental composition, but also his ingenuous way of dealing with new musical approaches. Out of the 5 trios that Gouvy has written, we have chosen nos. 2, 3 and 4.

Louis Théodore Gouvy (composer)More information
02-11-2018 Fanfare
"The playing by Voces Intimae is really superb. The players sound really engaged in the music and responsive to Gouvy’s half-French/half-German modes of expression. Strongly recommended."
05-10-2013 Telegraaf
""They play on historical instruments, the wing is a Pleyel from 1848. Good that there are record labels who dare this""
22-09-2013 www.opusklassiek.nl
""Altogether three sublimely executed and beautifully recorded luster pieces from the Belle Epoque. For me personally, it could've been all five!"

01-07-2013 BBC Music Magazine
"Committed performances on period instruments"
01-06-2013 Luister Magazine
"It is the quality of execution that gives the most pleasure. The virtuoso piano part by Riccardo Ceccetti interpreted on a beautifully restored Pleyel, is ideally balanced with the violin (Luigi de Filippi) and cello (Sandro Meo)."
01-06-2013 Music Web International
"Such a sparkling recording and performances with as much commitment as these."
08-04-2013 Knack
"Why buy this record? To hear how the Romatic sounded when it was fresh; your listening does not get colored by recognition
"

01-03-2013 Knack
"Why buy this record? To hear how romance sounded when it was still fresh ... and because Vces Intimae is the worlds best piano trio."
Pizzicato
"Gouvy's compositions have both: the graveness and pondering of Brahms and the french charm and elegance. Voces intimae find their own personal way to that wonderful intersection. They perform Gouvy with a high level of virtuosity, with admirabel cantilena, deep passion, pastoral idyll. "
concerto
"Voces Intimae devote to that music on a high level. In the center of the musical interpretation and of the recording is the piano, a Pleyel made in 1848, which mellow and nevertheless present sound is excellent balanced."
Ensemble
"Voces Intimae proceed on the one hand crystal-clear and analytic, on the other hand equally precise, sensitive and beautiful sounding."