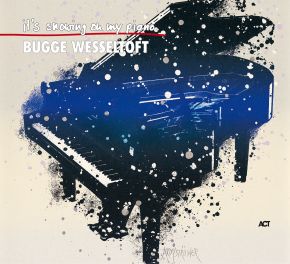 It's Snowing On My Piano (vinyl)

Since Bugge Wesseltoft’s ACT debut and first solo album ever „It’s Snowing On My Piano“ was released in 1997, the album became a modern Christmas classic. The music was celebrated for it’s „almost transcendental beauty“ and timeless meditative power. With more than 130.000 copies sold, “the greatest Christmas-CD in contemporary jazz“ (German newspaper WAZ) likewise became ACT’s best selling album to this day. Just in time for it’s 15th anniversary, a high definition analogue remaster of the original album is exclusively rereleased on Vinyl.

The success story began in Stockholm, in September 1997, when ACT’s label boss, Siggi Loch, discovered the painting "It´s snowing on my piano" by Ardy Strüwer in Nils Landgren’s flat. The next day, in Oslo, he suggested to Bugge Wesseltoft that he record a solo piano production "with Christmas in mind". Bugge is a declared opponent of a commercialised Christmas yet he found the idea of making a CD with Christmas music, which his young daughter would also like, interesting. In October everyone then met in the Rainbow Studio and, with his daughter Maren on his lap, Bugge began to fantasise about Christmas songs and old folk tunes. It is probably precisely this carefreeness which defines the magic of It´s snowing on my piano. Yet perhaps the fascination also lies in the fact that this is Wesseltoft’s first solo recording: you can feel the desire for discovery and originality in every sound – as they say, “the first cut is the deepest”.

Wesseltoft brings out the true beauty of the piano with an intimate sound language, the art of subtle variations and a pronounced dramaturgy. The whole wealth of his puristic piano music reveals itself in minimalism. “It’s very calming to hear Christmas songs which aren’t tacky with pathos and sentimentality but which only exude calm and tranquillity which is suited to the period in between the end of one year and the start of the next,” Jazzthetik wrote about Wesseltoft’s interpretational approach.

Bugge Wesseltoft, born 1964, is one of the most notable trendsetters in contemporary European jazz. As a leading talent, he works both in the foreground as well as the background. He is regarded as the “mastermind” of a whole new generation of musicians which fuses classic jazz with electronic music. Under the title and CD of the same name, New Conception of Jazz, Wesseltoft strives for a synthesis of live electronic music and improvised jazz. In addition to this, he also focuses on purely acoustic piano playing. With his own record label, Jazzland, which he established in 1996, he has created a platform for the Norwegian music scene which enables artistic freedom away from commercial mainstream. Bugge Wesseltoft works with well known artists such as Sidsel Endresen and Jan Garbarek or DJ Henrik Schwarz.

In working for ACT Wesseltoft essentially became famous for the lyrical and melodious facet of his artistic personality. His 2012 ACT album „Last Spring“ (ACT 9526-2) may be considered as the spring-like sequel to “It’s Snowing On My Piano”. In collaboration with classical violinist Henning Kraggerud, Wesseltoft once again returns to Norwegian lore, but this time adapts classical compositions – for example by Edvard Grieg – to create an album of minimalistic meditations. The innovativeness of the collaboration lies precisely in this subtle combination of classical music with jazz. The album is centred on little details, variations of the melody, on the amplitude and beauty of the sound and a perfect balance. "Last Spring" is not a cheerful, whirling crescendo but a nostalgic celebration of the artist's memories of spring in Norway. Together Kraggerud and Wesseltoft paint a musical picture of their homeland with an intensity that fascinates.