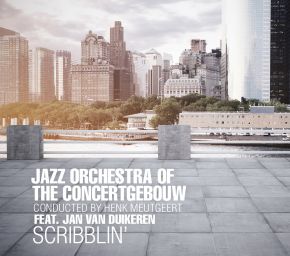 ‘Will big bands ever come back?’ has been a perennial question on the jazz scene since the 1950s. Originally it simply expressed nostalgia for the golden years of the swing era which would, of course never return – after rock, soul, disco, funk, rap, and what have you, had taken over as the dominant dance and club music for the youth of the world. However, during the last decades the big bands made a comeback of sorts, albeit in a different function, the big band of today is no longer the backdrop for dancing and romancing, but the jazz equivalent of the symphony orchestra. It gives young musicians the chance to develop their craft, and at the same time it enables composers and arrangers to create music for a larger ensemble than the standard jazz quartet or quintet.

It is precisely with that double intention that the Jazz Orchestra of the Concertgebouw was founded.

In 1995, some prominent young Dutch jazz musicians approached the experienced pianist and arrange Henk Meutgeert about starting a big band. The orchestra go a biweekly Sunday evening gig at the famous Bimhuis in Amsterdam, and soon grew to national stature.

In 1999 it changed its name from New Concert Big Band to Jazz Orchestra of the Concertgebouw, further proof of the esteem in which the band and its leader were held.

From the beginning, Henk Meutgeert wanted the orchestra to be per- manently challenged, by guest soloists as well as guest composers, from every style in jazz. To mention just a few national and international names: Benny Golson, Chick Corea, Branford Marsalis, Lee Konitz,

Meutgeert’s energy and creativity are matched only by his generosity, in giving his band members abundant room to contribute and perform their own compositions, as witnessed by recent JOC CDs.

The album Blues for the Date, with compositions by pianist Peter Beets, won an Edison Jazz Award in 2010. Two years earlier, guitarist Jesse van Ruller got the opportunity to record his music with the band on the CD Silk Rush, And now a third JOC musician, trumpeter Jan van Duikeren, presents his compositions on the album Scribblin’, which I hope you are playing right now. In a way, this CD marks a new step in the band’s development. Jan van Duikeren finds his inspiration not just in the jazz tradition, but also in today’s highly varied music scene. So we hear contemporary grooves (as in the opening Black, White & Brown) back to back with swinging bop beats (Happy Quick Licks), everything held together perfectly by Martijn Vink’s masterful big band drumming. Certainly not to be forgotten are the contributions of Henk Meutgeert and Rob Horsting, who wrote the inventive arrangements of Van Duikeren’s themes. And then there are the impressive solos by Peter Beets, tenor saxophonists Simon Rigter and Sjoerd Dijkhuizen, Joris Roelofs on bass clarinet, trombonist Bert Boeren and guitarist Martijn van Iterson. Of course, Van Duikeren himself is the most frequent soloist, proving the truth of his statement in a recent interview: ‘I play just as rhythmically as the drummer.’

With its combination of explosive excitement and pensive romanticism, Scribblin’ will give as much joy to loves of traditional big band jazz as to forward-looking young listeners. This CD leaves no doubt: big bands have definitely come back.