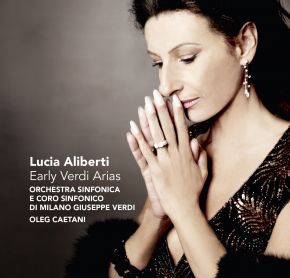 Soprano arias from the time of Verdi’s notorious penchant for a pessimistic stylisation all his own, for doom-mongering, and for black humour…these were his “galley years”, as he described them. Verdi was the most successful Italian composer of his generation, was besieged with commissions, and toiled away to such an extent that his health was endangered.

Lucia Aliberti presents twelve Verdi heroines. Each one is at a turning point, one dictated by fate. And each character senses all too well the need to show resolve in an extreme situation. Three of them (Giovanna, Lady Macbeth, and Elena) are not allowed to give vent to their feelings and display their wares at all costs in a cabaletta. But Verdi leaves ample room for this with the remaining nine. Cavatina and cabaletta – a dramatic model that can produce a plethora of arias and can bring forth countless variations. The Verdi that Lucia Aliberti interprets here is mainly a Verdi the world has not encountered up to now, and it soon becomes apparent – perhaps the degree of surprise is not so great – that the “unknown” Verdi is also a “Verdissimo”.

Giuseppe Verdi (composer)More information
Oleg Caetani (conductor)More information
Orchestra Sinfonica e Coro Sinfonico Di Milano Giuseppe Verdi (orchestra)More information
01-11-2014 Mélomano
"the eternal heroine of bel canto"
10-10-2013 International Record
"one of the more collectible tributes to Verdi in his 200th anniversary year"
01-10-2013 Gramophone
"Lucia Aliberti is exactly the right soprano to tap the lyrical power of Verdis vocal writing.  In a well-chosen collection of arias that welcome the filigree puritiy of her voice.  She delivers expressive elements and vocal fireworks as all of a piece.  Often, young Verdi seemed to expect multiple vocal types of within the same aria.  Aliberti suggests that he knew exactely what he was doing, seconded by Oleg Caetani's alert conducting."
30-09-2013 Gramophone
""With a legato line unblemished by aspirating, the seasoned Bellini specialist Lucia Aliberti is exactly the right soprano to do so in a well-chosen collection of arias that welcomes the filigree purity of her voice but doesn't lead the ear to expect the kind of truck-driver chest voice that Verismo singers bring to Verdi""
01-09-2013 L'opera
"A special voice, for timbre and color, Aliberti confirms her privileged relationship with early XIXth Century ‘expressive belcanto’. Thanks to an outstanding technique, Aliberti not only manages difficulties, but can also achieves an absorbing performance."
31-08-2013 Radio BBC
"12 Verdi-heroines.  Excellent Entertainment.  Bold playing, a rich recording."
13-08-2013 Financial Times (UK)
"Lucia Aliberti sings 21 top-notch arias from 12 Verdi operas. This CD is the best Verdi disc to come my way this year and deserves its attractive packaging. With alert accompaniments conducted by Oleg Caetani, Aliberti sings 21 top-notch arias from 12 operas, many of them lesser-known and all showcasing her majestic coloratura."
05-08-2013 pizzicato
"Lucia Aliberti recorded this program five years ago. Alas, even at that time, her voice had to much of an annoying vibrato. However, when she sings with her beautiful mezza voce, one can experience a nice belcanto. In any case, the program of the CD with only arias from young Verdi is interesting enough to recommend this new release. "
01-08-2013 Luister
"More than a fascinating battle, with time, this exemplary composite recital this is also a fascinating final agreement for the fans then."
31-07-2013 Luister
"She shows she is a master in managing her voice, and she sings downright enchanting. "
28-07-2013 Sunday Times UK
"At her best, she is beguiling."
26-07-2013 Luister
"With time this exemplary composite recital, it's also an exciting finale for the fans from then."
01-07-2013 Akapelle
"It's real fireworks"
17-06-2013 Luister
"More than just a fascinating fight with time. This Remarkably well put together recital is also a very absorbing final chord for fans from the early years."
07-06-2013 Platomania
"The beautiful aria's from opera's as 'Ernani', 'Alzira' and 'I due foscari' deserve a bigger audience. This beautiful recital will certainly contribute to their fame."
07-06-2013 klassik-heute.de
"Lucia Aliberti shines on this release by showing the generous attitude of diva, heroine and virtuoso. Besides she reveals her will to forms, her creative imagination, her keen sense of details in phrasing, articulation and colouring, she sings consistently eminent musically and with passionate abandonment."
10-06-2012 klassik.com
"Eraly Verdi interpreted with maturity"