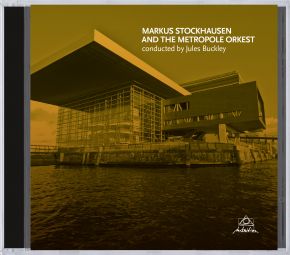 When Markus Stockhausen composes, he creates a multi-dimensional cosmos from sounds. He succeeds in doing that even with compositions for small ensembles. However, when he does this for a large orchestra as here, then he has an almost inexhaustible range at his disposal. And he understands how to use it: The two pieces YIN and YANG were composed between March and May 2011 and were first performed in the Amsterdam Concertgebouw in the same year.
"The idea was to compose specifically for the Metropole Orkest and its soloists. I tried to make YIN softer and more colorful with warmer qualities of sound. On the other hand, YANG starts powerfully with a sudden heightening; it has a great deal of expressive power with a high energy level and clear rhythmic grooves. The end is then again carried by the four soloists from YIN. With that, the circle is closed and Yin and Yang are reconciled,” Stockhausen wrote about his thoughts concerning the two compositions.
A composition follows with TANZENDES LICHT that Stockhausen once composed for the Camerata Bern and Swiss Jazz Orchestra and enhanced for the Metropole Orkest. The piece was intended as homage to Paul Klee, and Stockhausen was inspired by the shimmering light at sunset on a large body of water. These reflections are again found in the music and stimulate the tones to dance in an unusual beat (9/8), but which is played around with so easily and loosely that you hardly notice it.
The encore piece FELICE was – as are YIN and YANG – composed for this concert evening, which was recorded live. Stockhausen: "The music should simply put you in a good mood"! Judged by the thunderous applause, he certainly succeeded in that.
Growing up in the house of one of the most famous German composers (Karlheinz Stockhausen, 1928-2007), Markus Stockhausen realized at an early age that he would remain in the world of music, but had to set his own accents. He dedicated himself increasingly to jazz, explored the music traditions of other countries and studied popular music without losing his relationship to the tradition of classical music. He played and plays with musicians from all corners of the Earth, and he seems to be searching untiringly for additional inspirations. His sound on the trumpet has an almost unmatched clarity and brilliance, but he never becomes a slave of a line in written notations.  Stockhausen has already recorded several dozen CDs, but this one is not only a very notable production from the standpoint of music.
It was almost the last recording with the Metropole Orkest, but the many protests against its closing had their effect and parliament approved further financing at the end of 2012 for the time being. The radio orchestra, which has existed since 1945, has earned an almost legendary reputation since its founding and is considered the last of its kind in all of Europe. The orchestra is at home in all genres, has accompanied all stars of music history from Ella Fitzgerald to Joe Cocker, and has some of the best musicians of Central Europe. This recording proves that the orchestra is at the high point of its musicality and equipped with unbelievable sensitivity and awareness, with overflowing joy of playing and impressive technique. The influence of the conductor Jules Buckley (regular guest conductor alongside of Vince Mendoza) is not to be underestimated either; he carefully led the orchestra into Stockhausen's style. His experience in numerous crossover projects (as in the Heritage Orchestra co-founded by Buckley) cannot be overheard, and genre hurdles are also passed easily here.
Markus Stockhausen and the Metropole Orkest: really successful collaboration, which fired the enthusiasm of the audience during the performance. And which we can experience now too as a live recording – every minute is worth listening to!