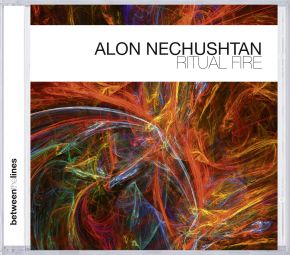 Alon Nechushtan was born in Rishon le Zion (near Tel Aviv) in 1974. He already learned to play the piano when he was six years old, and he began to compose for chamber music ensembles when he was 10. Private studies under Slava Ganelin as well as listening to the current music of his youth from Genesis to Pink Floyd stirred his awaking interest for jazz pianists – and of course composition studies from Debussy to Shostakovich. He also played in jazz combos during his classical composition studies in Jerusalem. After he received his Master's degree, he moved to the USA for good in 2003, first to Boston (on the advice of Between the Lines artist Yitzhak Yedid) where he continued his studies under Ran Blake, Paul Bley, Fred Hersch and others. Bob Brookmeyer was also one of his mentors, and he conducted numerous premiers of Nechushtan's compositions. He moved to New York in 2003, and his first recordings were soon released, among others on John Zorn's label Tzadik. Since then he has worked with many musicians such as Marty Ehrlich, Frank London, Ned Rothenberg, Eliott Sharp, Mark Dresser and many others.
Alon Nechushtan is presenting a very special guest on "Ritual Fire": Harold Rubin born in South Africa in 1932. He studied classical clarinet, but was already attracted to jazz in his youth, first to the music of Duke Ellington and Count Basie, and later to Erik Dolphy and Tony Scott. His band celebrated his first successes and played at the first Jazz Festival in Johannesburg, among other places. He emigrated to Israel in 1963 due to the Apartheid system. He worked there successfully in his profession as architect and painter and was involved in the peace movement, so that he had little time for playing the clarinet. However, he got involved again at the end of the 70s, influenced by the free jazz of Cecil Taylor and John Carter, with his own bands ("Zaviot Quartet") and on tours through Europe and the USA (among others, with Jim Pepper and Christoph Spendel). Rubin has closely linked his life's personal, social and music freedom.
Bob Meyer (born in 1945) is one of America' drummers most in demand by musicians such as Joe Lovano and Ed Schuller to Rick Margitza and John Abercrombie, with whom he currently plays in a quartet (with Adam Kolker and Johannes Weidenmuller). His timing and his sensitiveness provide "Ritual Fire" with a stable foundation.
Ken Filiano on bass (born in 1952) is currently one of the most innovative and virtuoso musicians in his field. His collaboration is highly esteemed by numerous co-musicians (Bobby Bradford, John Carter, Frank London, Giora Feidman, etc.). His openness for new experiences seems unlimited, and he also provides brilliant moments time and time again in Alon Nechushtan's trio.