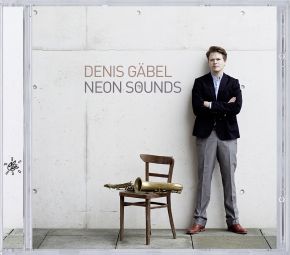 He is one of the saxophonists most in demand in Germany, and Denis Gäbel can afford to fill his band with the musicians most in demand in their areas too. This band makes a statement with "Neon Sounds" that proves that Germany is one of the countries setting the tone in jazz in the meantime – and not just in the area of the next generation, but also with established musicians. The eight original compositions (only one song, "Devil Woman", is by Charles Mingus) impress with their roots in the tradition of jazz, with lots of blues, hard bop and swing in blood, but they also point the way to modern interpretation: from pulsating groove to flexible funk, and all of that at the highest level. It is above all remarkable that Gäbel succeeds in doing something very rare with his pieces: the link between catchy melodies and demanding harmonics, which in turn challenge every improviser. A radiating tenor saxophone with a clearly identifiably, individual sound and impressive energy in combination with the unusual sound of an original Wurlitzer e-piano and the good old Fender Rhodes sounds. In addition, a driving bass and airy, sensitive drum playing. A joyful celebration for jazz lovers, regardless of which faction they belong to, because simply wonderful and stirring music is provided here that crosses borders.
Denis Gäbel, in the meantime "thirty-something", the younger brother of the internationally known singer Tom Gaebel, started his music education at an early age thanks to a musical family. After cello and piano, he soon discovered "his" instrument. He already won his first big prize (1st prize in the Young People Play Jazz Contest held by North Rhine-Westphalia in 1993) when he was 13. He soon played in renowned bands and then in BuJazzO under Peter Herbolzheimer from 1999 until 2002.  He studied Amsterdam and New York at the same time, and recorded his first CD, a tribute to his idol Sonny Rollins ("Keep On Rollin", released in 2007). In the meantime, he is an established musician in the German jazz scene and has played not just very often with his brother, but also with well-known colleagues such as Frank Chastenier, Dusko Gojkovic and Billy Cobham. He additionally made exemplary contributions at the debuts of younger jazz musicians such as Felix Heydemann and Hannah Köpf (Jazz thing Next Generation).
Pablo Held as pianist is one of the most successful jazz musicians in Germany, a "bearer of hope for the genre" (Stefan Hentz, Die Zeit). Of course, he is consequently a pianist much in demand and has played with many known musicians from Dave Liebman and Till Brönner to Nils Wogram. His trio recordings are regularly overwhelmed with praise from the press. But people have rarely heard him on Fender Rhodes and even less often on Wurlitzer; this sound makes "Neon Sounds" even more exciting.
Another star (not only) in German jazz has also been in the trio of Pablo Held for many years. Although he is the youngest band member, Jonas Burgwinkel (Echo prizewinner 2012) has already played with many internationally known jazz musicians. He can be heard on more than 40 CDs, most recently on the current album of Michel Reis ("Hidden Meaning") at Double Moon Records.
Martin Gjakonovski can also be heard on releases from Double Moon Records (among others, by Anke Helfrich), but also on recordings by Paul Kuhn, Ferenc Snetberger, Dusko Gojkovich, etc. He is above all in demand as bassist thanks to his timing, which could serve as a measuring gauge for Swiss timepieces, and for his clean intonation. He once again proves on "Neon Sound" that he stimulates his co-musicians to top-rate form with his driving groove.