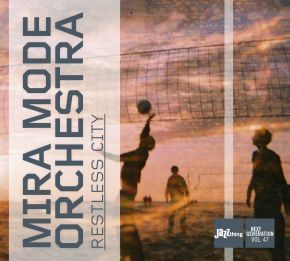 Setting Off in a New Direction.
With its debut "Restless City", the collective around the saxophonist and composer Ede Merkel describes the pulsating, urban hustle and bustle in voluptuous, even cinemascopic-like sound qualities. In addition to the leader Merkel, the band is composed of a septet as a basis. It is supplement by a string ensemble on "Restless City", which fits in organically as a matter of course. Clara Hill sings as guest vocalist on "Glacial Moraine, and Simple One lends his warm voice to the piece "Shade of Ivory". The music by Mira Mode Orchestra is an amalgam of genre-overlapping styles. Acoustic jazz meets gently buzzing funk, minimal music with its repetitive sounds contrasts with more groove-oriented electronic music, and arranged orchestra sounds round it all out and give the music a special touch. All pieces can be unified in their own coolness, which reminds us more than once of the "Cinematic Orchestra". A great first work in a contemporary look.

The saxophonist, composer and band leader Ede Merkel was born in Halle/S. in 1983. After he graduated from high school, he studied jazz and popular music at the Berlin Jazz Institute (HFM Hans Eisler / UDK). He already played in numerous bands while studying, from big band to Indie band. In addition to the all-rounder's busy activities as composer, arranger and bandleader, Ede has also worked for such different artists as Funkfood, Feindrehstar and Clara Hill. He has been teaching at the Brandenburg Free Music School for the past four years.

His band is composed of outstanding young musicians, each of whom is already successful in his field: Sebastian Piskorz studied trumpet in Berlin and Oslo and is currently studying for a Master's degree in composition in Dresden. Nils Marquardt (1982) grew upon the island of Rügen. He started his music education when he was four years old, which eventually took him to classical trombone. At the same time, he took lessons from Dan Gottshall and Nils Landgren, among others, and later studied at Berlin Music College. Eren Solak studied classical piano at the Baden Conservatory in Karlsruhe and at the "Hans Eisler" Music College in Berlin. He teaches at the Potsdam Free Music School.
Joachim Ribbentrop was born in Karlsruhe in 1980 and studied at Stuttgart Music College. He took individual lessons from the renowned guitarists Jesse van Ruller and Martijn van Iterson during a stay in Holland. Felix Otto Jacobi (1980) studied contrabass and e-bass at Dresden Music College. Friedemann Pruss (1986) studied at Leipzig Music College and Berlin Music College. In addition to playing drums in the Mira Mode Orchestra, he also plays in the band "Eder", among others
Guest star Clara Hill performs in NuJazz, Triphop and House and is known for her collaboration with Jazzanova and Sonar Kollektiv, among others. Simple One is a known rapper, poet and singer in the scene – one of the few with an unadulterated hip hop attitude.