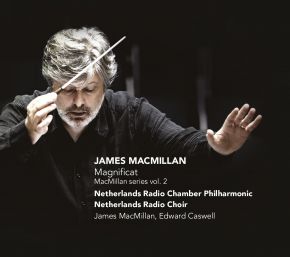 This second volume of works by James MacMillan explores his liturgical music as well as orchestral work: his deep commitment to the Catholic faith and his dramatic and colourfully expressive writing for the orchestra have two constants during the course of his career, with frequent overlapping between the two.

O may seem at first to be a fashionably enigmatic title. In fact, it is the vocative “O” found in so many liturgical texts, and famously, in the Latin rite, the “O” antiphons which frame the Magnificat at vespers on the last seven days of the season of Advent. The vocative “O” in these remarkable texts addresses Christ, using a title drawn from the Old Testament prophecies of Isaiah and Micah – Sapientia (Wisdom), Adonai (Lord of Israel), Radix Jesse (Root of Jesse), Clavis David (Key of David), Oriens Radiant Dawn/Daypring), Rex Gentium (King of the Nations), Emmanuel (God with us), the initials of which, when reversed, form a Latin acrostic – “Ero cras”, meaning

“Tomorrow I come”.
In 2007 MacMillan set the antiphon for 21 December, O Oriens, in English translation as O Radiant Dawn, one of the series of “Strathclyde Motets” that the composer has written for practical liturgical use, simple of texture and memorable of melody. The present work is an adaptation of the motet, made in 2008, for three treble voices, trumpet in C and string orchestra. The musical material of the motet is left intact, gently haloed and amplified by the strings, but the bipartite structure of the original is changed by the insertion of a central section, heralded by the trumpet, in which the voices construct a meditative fantasy on the vowel “O”, while the wide-ranging trumpet writing seems to project the radiance of the Christological title of the text. The trumpet returns at the end of the work, hovering over pulsing choral repetitions of the word “Amen”.

Tryst is the earliest work on this disc, and was written in 1989 to a commission from the St Magnus Festival in Orkney. It was first performed there by the Scottish Chamber Orchestra, under the direction of Paul Daniel in June of that year. The work is in one movement made up of five sections, and is dedicated to Susan Loy, the composer’s grandmother, who died in March of that year. In many ways this is the work in which the composer’s technique and vocabulary proclaimed that he was a presence
to be reckoned with, though wider renown would come with The Confession of Isobel Gowdie, completed in the following year. The work’s title comes from a poem in Scots by William Soutar

MacMillan initially wrote a simply melody for the poem, a melody that has, as he notes, “persistently appeared, in various guises, in many works composed since – a congregational mass setting, a tiny fragment for violin and piano (After the Tryst) and ... in my music theatre piece Búsqueda. Not only has it cropped up again in this piece, but it has provided both the title and the emotional core of the music.”

Though the poem is apparently a straightforward love poem, MacMillan finds in it a whole world of conflicting sentiments, associations which are transferred to the melody, which has thereby attained the status of symbol in his work, suggesting, he says “commitment, sanctity, intimacy, faith ... love, but it is also saturated with
a sadness as if all these things are about to expire.”

This ambiguity is what makes Tryst such a compelling piece. There is certainly a feeling of farewell, and lamentation, but even though one might also detect acceptance, the work is far from pacific. Indeed, it opens with what one might describe as a violent keening, a glissando- drenched duet for clarinets combined with loud interjections from the whole orchestra. There is also a more “ceremonial” style of writing, perhaps suggesting Stravinsky’s  Symphonies of Wind Instruments as an ancestor, or just possibly even the chorales of Birtwistle, that first appears in the second section of the work. This solemnity is gradually transformed into a kind of intoxicated dance, but again, consistent with the mercurial quality of the work, we are unexpectedly presented with a calmly beautiful chorale, played by pianissimo strings in a way that suggests a consort of viols, under soaring, questing violins, prefiguring moments in both Veni, Veni, Emmanuel (1991-2; recorded on volume 1 of this series, Challenge CC72540) and Seven Last Words from the Cross (1993). This in turn is transformed into a folk lament, but one framed and coloured by the full resources of the orchestra. The final section brings back the chorale-like material from the central section, but once again, it is contradicted by faster, more athletic writing; in keeping with Soutar, the music fades softly away to nothing:

MacMillan’s settings of the Magnificat and Nunc dimittis were written in 1999 and 2000 to commissions from the BBC and Westminster Cathedral respectively. The Magnificat was intended to be sung at the first BBC broadcast of choral evensong of the new Millennium, from Wells Cathedral, and both works exist in versions for choir and organ and for choir and orchestra. They are both large-scale, celebratory compositions, with dramatic and colourful writing for the orchestra – the spacious, haunting orchestral opening is surely one of the most unforgettable scene-settings for this text ever written – and making use of predominantly homophonic choral writing, rather different from the composer’s preference in general for melisma and highly decorated melodic lines, so that when more ornamented writing does appear, at “He hath filled the hungry with good things...”, it is the more striking. The doxology is positively shocking in its blazing, brassy, almost snarling portrayal of divine glory, but the quiet dynamics of the choral “Amens” and the final descent into mysterious calm with string glissandi imitating doves are a typically subtle MacMillan touch.

While the Nunc dimittis shares material with the Magnificat (most obviously the final “Amen”), it appears in a different guise, with much transformed modally. The work opens with basses quietly intoning the word “Lord” on a low E, doubled by cellos and double-basses and enveloped in a bass drum roll. The composer emphasizes in his note to the work the “unusual” chirping unison melody that subsequently appears for trebles, altos and tenors, doubled in the organ version by the sesquialtera stop, and orchestrally by woodwind, trumpet with mute and harmonics on the violin. At the end the music subsides back onto the basses’ low E, the starting point for this awe-struck exclamation of faith.
Ivan Moody

Netherlands Radio Choir (orchestra)More information
03-03-2014 luister
"I must say that the music of MacMillan pleases me much, since it emits many aspects and does not get bored quickly. The recording is excellent: a gigantic t stage against an black background "
01-11-2013 BBC Music Magazine
"It is an excellent demonstration of the benefits accuring when a composer is also a technically fine conductor."
25-09-2013 www.opusklassiek.nl
""This is music that matters, both in its mystical and in its secular sense""
12-09-2013 www.musicweb-international.com
""MacMillan’s music may initially seem heavy and tough to penetrate but this excellently performed second volume is approachable, with a reasonable amount of concentration, and will certainly bring rewards""
01-09-2013 Music Web International
"
James MacMillan’s conducting provides textural and structural clarity while the Netherlands Radio Chamber Philharmonic respond with style. "

31-07-2013 Luister
"I must say that the music of MacMillan extremely pleases me, since it shows many aspects, and does not get bored quickly."
30-06-2013 Scotland On Sunday
"All compositions demonstrate the beautifully rounded atmospheric effect, deriving from a thoughtful, modern writing style that makes MacMillan one of today's most popular composers of religious music."
01-06-2013 International Record Review
"This composer-conducted performance is no doubt the best way to get to know, understand and perhaps even love the work..."
18-05-2013 Financial Times
"Excellent performances."
05-05-2013 Platomania
"Breathtaking."
NRC Handelsblad
"The Catholic MacMillan writes melodious choral music with an edge, convincingly sung by the Radio Choir."