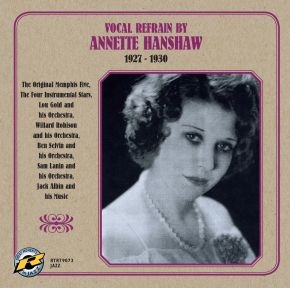 Catherine Annette Hanshaw was born in Manhattan on 18 October, 1901 and died on 13 March, 1985. In the years from 1926 to 1937 she was a top radio and recording star, but more than a little reluctantly, retiring at the height of her career.

That career was, I believe, a love story.

From her earliest years Annette loved to sing and was encouraged to do so by her parents. They were basically hoteliers and their sweetly pretty daughter was often co-opted to sing at parties for their guests. But, although she taught herself to play the piano and the ukulele she had no thought for a singing career. Her natural nervousness did not seem to fit her for show business and, despite being offered two music scholarships she opted for studying art. Her father set her up in a record shop, “The Melody Shop” and she seems to have been quite contented until at one of his parties in 1926 she met a man called Herman (Wally) Rose and fell in love with him. I have a vague memory of Annette telling me that Herman Rose was not his original name and also that “Wally” was short for Waldemar. He was an Artist and Repertoire Manager for Pathé Records and was so impressed that he asked Annette to audition to make records. Had he been anyone else she would probably have turned him down but, thankfully, she agreed and on 28 July, 1926 made a self accompanied test record at the Compo studio. When she had finished singing, not knowing what to do, she announced “That’s All”. The shrewd Wally spotted a gimmick and had her, somewhat against her wishes, sign off most of her issued records with that phrase. He also took 10 years off her age. It sounds outrageous but if one views the only extant piece of film of her made in the early 1930‘s when she was about 30 years old, she could easily pass for 20.

Wally Rose was certainly a jazz lover (in 1932 he was responsible for making The Rhythm Makers sessions widely regarded as among the hottest of all jazz records) and had already made the first recordings by Red Nichols and the Red Heads, using them also as a backing group for several of his artists such as Cliff “Ukulele Ike” Edwards, Jay C. Flippen (whose record closing gimmick line was “Turn me over!”) and Lee Morse. Now he used them toaccompany Annette on her first Pathé session. The results showed that she, more than most girl singers of the time, was at her best with jazz flavoured backings. Soon Wally had become her manager and on 12 June 1929 he also became her husband.

In the meantime the old Pathé company had been swallowed up by Columbia Records (who would in turn, be swallowed up by ARC). Wally and Annette moved on to Columbia along with Cliff Edwards and Lee Morse and in 1932 Annette and Cliff both went to ARC.

But, since 1926 Annette had been doing whatever manager Wally had thought best for her career and this included providing the vocal refrains for some of Pathé’s, and later Columbia’s dance band records. Few dance bands of that era had girl singers. It was not until Paul Whiteman hired Mildred Bailey in 1931 that female vocalists became an essential part of any successful band. The 24 sides that Annette made as a dance band singer are quite a mixed bag. The first three find herromping along very happily with The Original Memphis Five. The next couple are amongst her best recordings. She’s obviously very happy in the company of the Four Instrumental Stars, who swing mightly with Annette riding the rhythm with ease. Many years later, in one of our phone conversations she mentioned that she always loved working with guitarist Eddie Lang. “Great Musician and a great gentleman” was how she described him. She also admired, though was slightly scared of, Tommy Dorsey (who referred to her as “a musicians singer” – a compliment that she treasured) and among singers she singled out Ethel Waters and Connie Boswell (she wasn’t that interested in “The Boswell Sisters”, just Connie as a soloist) and thought that Lee Morse had “something different”.

Following the Four Instrumental Stars come 2 sessions of 4 titles each with the studio orchestra of Lou Gold. Gold made hundreds of sides with a very competent, but usually rather dull band, using what were probably “stock” arrangements and rarely featuring any interesting soloists. However it’s nice to hear how Annette handles the varied songs, giving each an individual reading.

Willard Robison was another colleague that Annette liked and admired both as a person and a musician and told me she enjoyed working with him. It shows. What also shows is the much more relaxed and interesting sound of the orchestra and the choice of better material. Songs like “There ain’t no sweet man’ suit Annette beautifully as does that great 1920 oldie “The Japanese Sandman”.

The three Ben Selvin sides are fine (some great sidemen) and very rare, two having only been issued on the legendary Paramount Publix label.
These were of songs featured in Paramount films and were sold only in cinemas showing the film from which the song came and then only during, the film’s run. Average quantity of pressings was around 300 copies. All three songs are excellent material forAnnette and include one of her “take offs” of Boop-boop-a-do singer Helen Kane of which Helen said “she’s more like me than I am”.

Our cd finishes with 2 songs by the not very interesting Jack Albin, but both are well suited to Annette, and just to prove that statement there is one song from Sam Lanin, which reprises one of those two tittles.

But as her popularity grew so Annette was becoming less and less happy with her career. Aside from her busy recording schedule she was now a major radio star and had received film offers from Hollywood (She told me that she had made a couple of shorts, one for Paramount and one for MGM, only the Paramount has surfaced). She admitted that she carried on partly because of the excellent money she was making and partly to please Wally, but she stopped recording on 3rd February 1934 and retired completely in 1937. Surely somebody must have some radio transcriptions??

I suppose one should also classify the dozen or so sides that she made with the most prolific and dullest of all
Hawaiian guitarists Frank Ferrera as “with vocal refrain”, but she hated ma-king them and disliked Ferrera intensely calling him “a bottom-pincher”, who’s wife would turn up at the studios and glare at her.

So ended, much too soon, a career that only happened because she fell in love with the man who first discovered her – lucky us.
This cd is dedicated to the memory of Brian Rust, who’s championing of Annette’s singing in the 1950’s and 60’s was really the beginning of the now generally accepted realisation that she was far more than just one of the many popular girl singers of her time. Thank you Brian.

01-08-2013 Doctor Jazz
"A blend of pure dance music and nice jazz, but always with a vocal highlight of Annette Hanshaw    "
VJM
"Annette Hanshaw is one of the few ‘pop’ vocalists of either sex from the Jazz Age, who can genuinely be called a jazz singer: her natural sense of timing and rhythm worked equally well with straight dance bands and small jazz combinations.

The tracks by the Four Instrumental Stars are well-known to most collectors, but are rarely heard on re-issues as crystal clear as they are here.

“When I Am Housekeeping For You” is a great side, issued on the rare Paramount Publix label. Perfectly suited to her vocal style, as indeed are the musicians themselves, who include Glenn Miller and Jimmy Dorsey.

This is an interesting and worthwhile collection and shows off Annette Hanshaw’s ability to craft a fine vocal to perfection. Transfers by Harry Coster are excellent throughout.