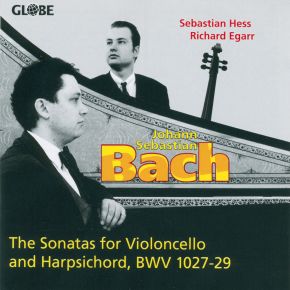 The Sonatas for Violoncello and Harpsichord, BWV 1027-29

Sebastian Hess was born in Munich in 1971 and studied the cello in Würzburg and Munich with Julius Berger and Helmar Stiehler. By far the strongest lnlluence on his playing came from his meeting with the great cellist and pedagogue William Pleeth with whom he went to study in 1989. He made his London recital debut in 1991 to great acclaim from the public and the press and has since made a great many appearances as soloist and chamber music player in such cities as Munich (Biennale), Frankfurt, Vienna, Aldeburgh, London (Almeida Festival), and in the Scandinavian countries.

Rlchard Egarr was born in Lincoln (England) in 1963. His musical training began as a chorister at York Minster Cambridge. After taking his Mus. B. degree in 1986, he spent a year studying with David Roblou at the Guildhall School or Music ln London. The following year, with the award of a Dutch Government Scholarship, he went to study with Gustav Leonhardt In Amsterdam. In 1988, he took top prize in the lnternational C.P.E. Bach Fortepiano-Clavichord·Harpsichord Competition In Hamburg.

The five-stringed cello used by Sebastian Hess for these recordings is a transition model which was fairly common between ca. 1660-1720 and offers a playing technique and texture of sound that is closer to the viola da gamba than an instrument in modern setup. This is one of the important features of these performances, since the works were written by Bach during that same transition period, when the viola da gamba was losing its territory in favour of the cello. The harpsichord is, of course, the only historically correct keyboard instrument to render these sonatas on.