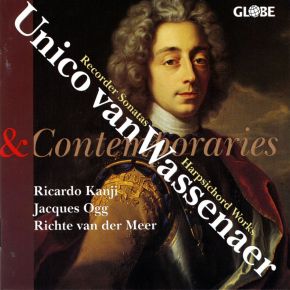 Ricardo Kanji was born in Brasil, studied first in Sao Paulo, then at the Peabody Institute in Baltimore, USA, after which he came to the Netherlands to study with Frans Vester and Frans Brüggen at the Royal Conservatory in The Hague, where he became professor of flute as successor to his own teacher Frans Brüggen. He is a member of the Philidor Ensemble, Frans Brüggen's Orchestra of the 18th Century and has performed all over the world.

Jacques Ogg studied with Anneke Uittenbosch and with Gustav Leonhardt at the Amsterdam Sweelinck Conservatory. He appears all over the world as harpsichordist and forte piano player and gives regularly master classes in leading music centers.

Richte van der Meer studied with Carel van Leeuwen Boomkamp and finished off his studies with Anner Bylsma at the Royal Conservatory of The Hague. As cellist and gamba player he performs with a great many renowned musicians and ensembles, La Petite Bande, the Amsterdam Baroque Orchestra and the Orchestra of the 18th Century among them.