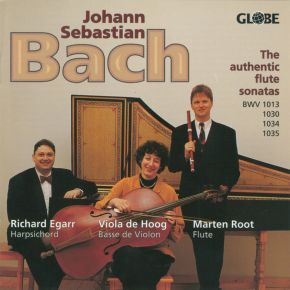 Marten Root studied the flute with Frans Vester, and the baroque flute with Bart Kuyken at the Royal Conservatory in The Hague. He is flautist with both the Biedermeier Quintet and the Schönbrunn Ensemble and principal flautist of the baroque orchestra of the Netherlands Bach Society and of Jos van Immerseel's Anima Eterna. He also regularly works with such orchestras as Tafelmusik (Toronto), the Hanover Band (London) and John Elliot Gardiner's Orchestre Revolutionaire et Romantique.

Richard Egarr first studied at the Chetham's School of Music in Manchester, then at Clare College, Cambridge and at the Guildhall School of Music in London. After this he studied with Gustav Leonhardt in Amsterdam and in 1988 he took top prize in the international C.P.E. Bach Competition in Hamburg. He works extensively throughout Europe in the major music festivals, both as a soloist and continuo player and is also the harpsichordist with London Baroque.

Viola de Hoog studied with Lidewij Scheifes and Anner Bijlsma at the Sweelinck Conservatory in Amsterdam. She concentrates mainly on playing chamber music, both on modern and baroque cello. She is the cellist of the world famous Schönberg Quartet, of the Schönbrunn Ensemble and also principal cellist with the Ensemble Anima Eterna.