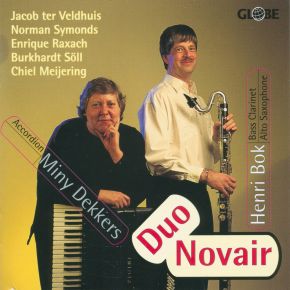 Works for bass clarinet or alto saxonphone and accordion

•Another unusual combination of instruments after the highly successful album with the Duo Contemporain, which also features clarinettist Henri Bok. Duo Novair takes its name from the combination of new music (Nova) performed on two instruments on which sound is produced through air. All the works on this record were especially written for Henri Bok and Miny Dekkers. Miny Dekkers is a pioneer in the development of new literature for the accordion as solo instrument and in chamber music, and many composers have dedicated new works to her.