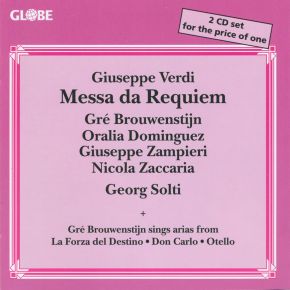 This release is also another homage to the great Dutch soprano Gre Brouwenstijn whose singing of the soprano part in the Verdi Requiem remains in our opinion unequalled to this day (as does Oralia Dominguez' performance of the mezzo part!). For music lovers, a recording of Verdi's glorious Requiem Mass is first and foremost a matter of the soloists and conductor and not of "authentic instruments". This is one of the most inspired performances ever, with the soloists ensemble of one's dreams and conducted in the great De Sabata-Toscanini-Giulini tradition!

As a "bonus", this recording offers Gre Brouwenstijn as the outstanding interpreter of three great Verdi operatic heroines, representing three other greatest Verdi roles in the theatre. All three the scenes are prayers in one form or another, and as such they form a suitable "addendum" to theVerdi Requiem and a "must" for the many fans of this unique singer.