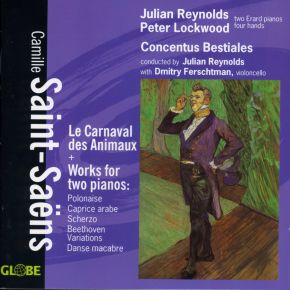 This Saint-Saëns' humourous master piece "The Carnival of the Animals", performed in the composer's original version for chamber orchestra, on two original Erard Grand Pianos by Julian Reynolds & Peter Lockwood with the ensemble Concentus Bestiales, cellist Dmitry Ferschtman as the unsurpassable performer of "The Swan", and an original glass harmonica. Plus five lesser known original master works for two pianos four hands by Saint-Saens, including the composer's own wonderful arrangement of his Danse macabre, also performed on two original Erard Pianos from the period.