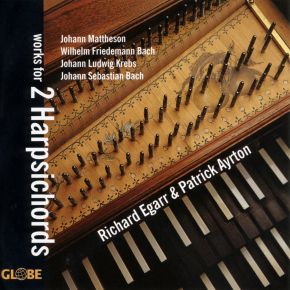 Two star harpsichordists have joined forces on this album in a program of seldom recorded pieces for two harpsichords. During the first half of the 18th century, performances on two harpsichords were a regular part of musical life, and the great composers enjoyed writing for this combination as can be deducted from their names in this program. Those pieces are also a great challenge to the performers because they require a maximum of technique and ensemble playing. Another element of this works is very much the idea of a 'duel' on harpsichords: "anything you can do, I can do better"... So it's up to the listener to decide who wins, and the answer to this question is not made any easier by the fact that the performers have swapped parts between pieces so that they remain 'masked' during the performances. The works are being performed on a matched pair of great sounding instruments by Joel Katzman, built after an original Ruckers harpsichord from 1628.