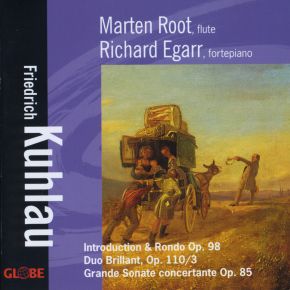 Kuhlau: Works for Flute and Piano

This is probably the first album with flute works by Friedrich Kuhlau performed on authentic instruments. This feature brings out all the charm, colours, virtuosity and musical pleasure that are characteristic of the compositions of this nowadays rather neglected composer. In his own time he was often referred to as the "Beethoven of the flute" but more than that, he was a very original musician who left a wealth of compelling music. Great composers from a later period, such as Tchaikovsky and Brahms, admired him immensely. We cannot think of more dedicated advocates for these highly spirited works than the renowned flautist Marten Root and his keyboard partner Richard Egarr, primarily known from his many albums as a brilliant harpsichordist, who on this album shows himself also a master of the 19th century fortepiano.