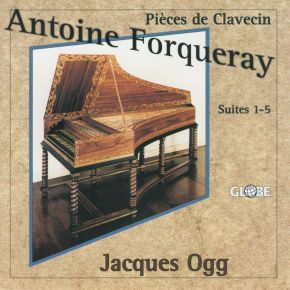 The world premiere recording of the complete Pieces de clavecin by Antoine Forqueray, court musician of Louis XN and one of the greatest viola da gamba players of all times. The Pieces de Clavecin comprise five Suites containing 32 pieces in total and were published after the composer's death by his son, the equally famous Jean-Baptiste-Antoine Forqueray in two versions: as viola da gamba solos with continuo and in a transcription for solo harpsichord, the latter being the better-known version.

Although famous players such as Gustav Leonhardt and Ton Koopman have recorded one or two of these suites, no one has ever before recorded all five of them as the equally outstanding harpsichordist jacques Ogg has now done. These are astonishing works in the virtuoso tradition of Rameau and Couperin, tasteful, original and sometimes bizarre, but also deeply-felt and always surprising.