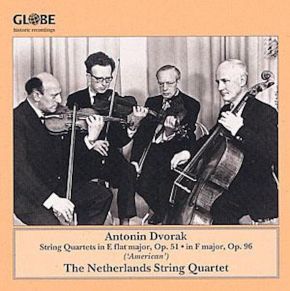 The first album in a series of three featuring the famous Dutch violinist Nap de Klijn who died in 1979 but who is still fondly remembered by a great many music lovers. He was the founder and great inspiration of the Netherlands String Quartet, who played all over the world to great acclaim during the 60s and 70s. He also formed a famous duo with his wife, pianist Alice Heksch, who was one of the very first to play the Mozart sonatas with Nap de Klijn on an original fortepiano.

On this album the Netherlands String Quartet play the two most famous String Quartets by Antonin Dvorak. The original (mono) recordings were made in 1955 and although the recording quality is like the quality of the digital era of today, the performances stand out as shining examples ofhow Dvorak's wonderful quartets should be played.