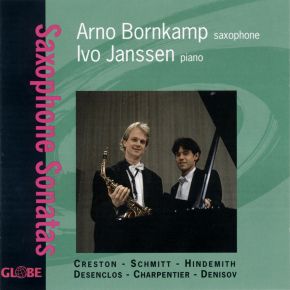 Sonatas for Saxophone and Piano

The album Saxophone Sonatas was first released in 1990. After a slow start, it became one of their best sold albums. Years after selling out, record stores still received orders for this recording. Now the album is making its comeback and still the album won't have to fear any competition. The performances of sonatas by composers such as Paul Hindemith, Jacques Charpentier and Edison Denisov are still as beautiful and powerful as always, and the remarkably good audio quality hides the fact that this recording is somewhat older than usual.

Saxophone player Arno Boskamp is a modern virtuoso, who is familiar with contemporary as traditional repertory. Since his debute in as soloist in 1982, he gave more than 250 concerts, many of which consisted of new works dedicated to him by contemporary composers. Bornkamp is also part of the Aurelia Saxophonequartet, and together with pianist Ivo Janssen he forms a duo.