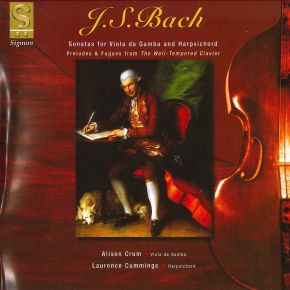 It is not difficult to discern many of the elements that render Bach’s three sonatas for viola da gamba and harpsichord so remarkable by the standards of their age: a mixing of virtually every conceivable genre, form, style, medium and gesture of the late German Baroque; a forging of connections that had not hitherto been made; a penetrating insight into the multi-dimensional potentialities of each motive, theme and polyphonic complex.

Composing for the viol in this way was by, the early eighteenth century, archaic, yet what has made J.S.Bach a summit for many is his apparent ability to transcend historical contingency, somehow to stop the clock of outward progress and to rearrange and recreate the world as he knew it.

On this album we hear the three sonatas for the Viola da Gamba and three Preludes and Fugues from the Well Tempered Clavier.