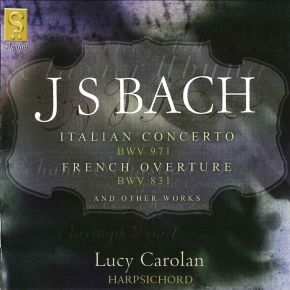 The Italian Concerto & The French Overture

We present the second volume of Lucy Carolan's recordings of Bach's keyboard music consisting of works from Volumes two, three and four of his "Clavierübung". Volume two contains the popular Italian Concerto and French Overture and concentrates on the number "two" - two pieces, two keys, two modes, two nations (Italy and France) and a two-manual harpsichord.

The Italian Concerto is unique: a wholly original solo keyboard work written as if "transcribed" from a string original to which Bach adds strikingly new ideas expressly suited for harpsichord. Bach had acquired his knowledge of Italian repertoire early on by transcribing Vivaldi violin concertos for solo harpsichord around 1712-13.

The contrasting French Overture contains lighter dances from the court of Louis XIV such as the gavotte, the passepied and bourrée - all are dance forms which had been familiar to Bach from his childhood.

The record also includes duets from volume three and the Chromatic Fantasia and Fugue which, although unpublished during Bach's lifetime, became an inspiration to subsequent generations of composers.