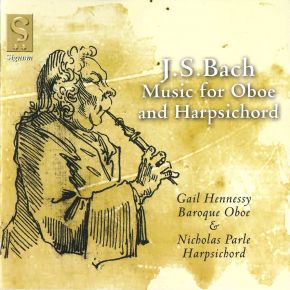 Music for Oboe and Harpsichord

J. S. Bach's g minor sonata BWV 1030b is perhaps better known in its later version for flute and harpsichord where it was re-cast in b minor (BWV 1030). For the earlier g minor version only the harpsichord part remains and it is a matter of conjecture which instrument Bach really intended. Of all his  flute works Bach's b minor sonata is the most ambitious, and played on the oboe the epic nature of the piece is even more evident.

Whilst being blessed with many wonderful obligato parts in the cantatas, the g minor sonata is the only large scale solo work for oboe players left by Bach.

If BWV 1030 can exist in both oboe and flute versions, why can't other pieces by Bach be similarly versatile? The remainder of the disc includes the often arranged trio sonata for organ, BWV 529 in C major, the flute sonatas BWV 1020, 1031 and 1033 and the harpsichord Prelude and Fugue in c minor BWV 871 from the Well-Tempered Clavier, Book II.

The authorship of the flute sonata BWV 1033 is called into question because of the style and quality of the basso continuo part. A theory, proposed by musicologist Robert Marshall, is that Bach wrote the flute part as an unaccompanied piece, and that either a son or a student of J. S. Bach added the accompaniment at a later stage. We therefore present the work here as an unaccompanied sonata, echoing the genre that Bach developed with his unaccompanied violin and 'cello sonatas.

Gail Hennessy and Nicholas Parle first played together in London in 1986. They discovered a strong musical rapport and their decision to record these Bach sonatas using oboe and harpsichord stems from their performances over the years of the "big" g minor sonata (BWV 1030b), a challenging work that, like much great music, reveals more and more with each playing.