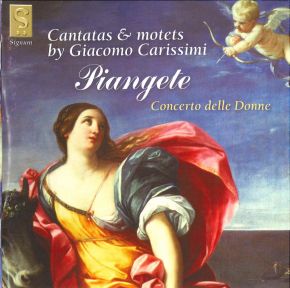 Carissimi is sometimes thought of as a "one-work composer" known to the average music-lover only for his oratorio Jephte. Choral Societies looking for 17th century music earlier than Purcell are therefore likely to choose Jephte. Alastair Ross first became interested in Carissimi’s music for the 3-soprano Concerto delle Donne line-up when he was asked to prepare a programme “Handel and his predecessors in Italy” for the 1977 Göttingen Festival. A review of Carissimi's oeuvre showed that there were several pieces by Carissimi in the library of Christ Church Oxford just waiting to be performed by the group! He chose the cantata Siam tre miseri piangenti which has become a regular item in their concerts and which is central to this recording. It’s a marvellous piece, full of pain, suffering and anger. The three voices really are equal in the way they intertwine and react to one another. Donna Deam’s solo Piangete and Gill Ross' and Elin Thomas’s duet Ahi, non torna are similar in mood. Maybe in our cynical 21st century we find it difficult to relate to these highly emotional, self-obsessed, texts, but there’s no denying that they inspired some wonderful music! Va dimanda al mio pensiero’ and Si dia bando, alla speranza are lighter in mood – both attractive, tuneful pieces.

In addition to the vocal pieces the disc includes a set of variations by Frescobaldi and Michelangelo Rossi’s flamboyant and chromatic Toccata Settima for harpsichord, together with Kapspereger’s charming improvisations for chittarone.

We believe that only one of the Carissimi pieces on this CD, Exulta, gaude, filia Sion, has been recorded before, so the disc will be an important event in the recorded-music world, and one which we hope will revive interest in this unjustly neglected composer.