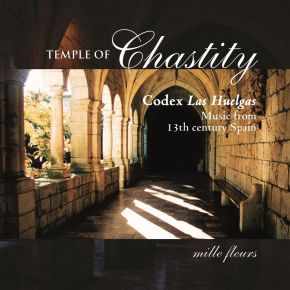 Mille Fleurs’ new album is devoted to one of the treasured manuscripts of early music, the Codex Las Huelgas.

This impressively large manuscript contains 170 parchment folios of works from the 13th and early 14th centuries. It was discovered by two monks early in the last century in the royal convent of Las Huelgas outside Burgos, Spain. It is unusual in several ways, encompassing a wide range of musical forms and styles, and being highly organised according to genre, liturgical function and number of voices.

The codex reflects the devotional practices of a medieval Cistercian monastery, but it wasn't designed as a luxury object, rather, a pragmatic tool to be used as a source of reference or perhaps even for actual performance. This is an especially intriguing manuscript for music historians, performers and listeners alike.

The pieces contained in the Las Huelgas manuscript reflect a wide range of Latin-texted music between 1200 and the first half of the 14th century. French influence is strong, illustrating the repertory as both international and local, imported, and adapted in a continual process of absorption and reinvention.

Mille Fleurs bring a wealth of experience and research to these performances. Some pieces are performed as written; in others the notation provides a starting-point for musical elaboration. These charismatic singers do not believe female early music vocalists should sound like modern choirboys, but instead celebrate their different vocal timbres with each voice’s natural personality shining through.

Just as the manuscript is pragmatic and adaptable as regards the notation of its musical repertory, so the performance approaches adopted and realised on this recording offer variety and flexibility, always respecting the nature of the piece.

One thing is clear: throughout the Middle Ages the walls of the monastery of Las Huelgas resounded to the most highly refined and eloquently beautiful musical settings then in circulation in northern Spain.