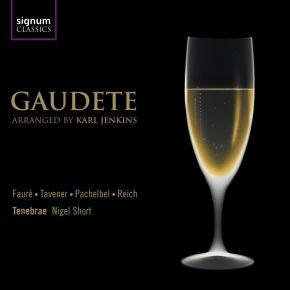 Arranged by Classic FM's Hall of Fame 2004 'top-ten-composer' Karl Jenkins, sung by crack professional choir - Tenebrae - Gaudete is released both with drums and percussion and as a pure, unadulterated, a cappella version.

Founded as recently as 2001, Tenebrae has been embraced by the public and critics alike as one of the most innovative and gifted groups in Britain. Tenebrae’s motto is “passion and precision”, but they also believe in accessibility, performing various different types of music as long as it’s good music, sung well.

Gaudete (“rejoice”) is an anonymous composition that was first published in 1582 in a collection of carols and other religious songs called Piae Cantiones. This collection, made by a Scandinavian called Peter Nyland, included a huge number of other Christmas melodies that have since become ‘standards’, but it only gives music for the chorus of Gaudete; the verses, which tell of the wonder of God’s arrival on earth in human form, have been taken from a Czech medieval song about the Virgin Mary, Ezechielis Porta.