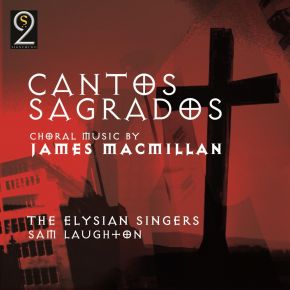 MacMillan characteristically draws inspiration for his vocal works from recurring themes such as the Catholic Church and Scottish traditional culture.

The most substantial work on this recording is Cantos Sagrados ("Sacred Songs"). MacMillan takes the poems of Latin American poets Ariel Dorfman and Ana Maria Mendosa, and combines their settings of political repression with traditional religious texts to create a powerful combination of liberation theology. The result is at times delicate, and then terrifying. The composer’s intentions were to create a work both sacred and secular, being timeless yet contemporary.

Of the other works on this disc, the majority are settings of Latin or English religious texts often written for particular occasions or places. A Child’s Prayer, for instance, was dedicated to the victims of the Dunblane tragedy of 1996, where one teacher and sixteen of her pupils were shot dead whilst in class. One of the two secular works on this recording, The Gallant Weaver is a setting of that most Scottish of poets, Robert Burns, to a nostalgic evocation of Celtic folk-music.

The Elysian Singers were founded in 1986. Since 1999 they have been directed by Sam Laughton and have established a national reputation as a young and lively chamber choir, winning awards for commissioning new music.