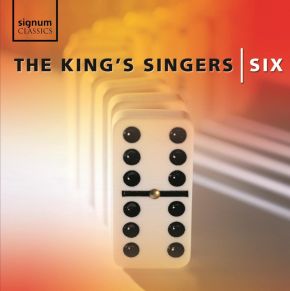 Formed in 1968 by six Choral Scholars from King’s College, Cambridge, the King’s Singers quickly became a prominent musical force in the UK. The rest of the world soon followed so that today the group’s engagements are spread throughout the four corners of the globe.

The ensemble are renowned for their commitment to blend balance and intonation in their performances, but above all it is their simple enjoyment of what they do that has captured the imagination of the public, and kept the King’s Singers at the top of their game for over three and a half decades.

This album presents six pieces performed by the six vocalists over the years. The titles were selected to span the life of the group so far: After the explosive rock decade of the 1960s in which the group was founded, you can almost hear the hair lengthen in Neil Young’s 1970 song After the Goldrush. This was originally sung by the group with Nana Mouskouri on her BBC TV show, and has remained popular ever since; Irving Berlin’s much-loved jazz classic Blue Skies is here sung in a cool and reflective arrangement by Richard Rodney Bennett; the Beatle’s Blackbird is one of the most requested encores happily sung to ecstatic audiences, and Daryl Runswick’s arrangement perfectly maintains the feel of the original song.

The remaining three tracks are all newly recorded pieces from the 21st century. Down to the River to Pray, a spiritual, appeared in the Coen brothers movie “O Brother Where art Thou?”; Billy Joel’s Lullaby Goodnight My Angel is an example of the songwriter at his lyric best. Finally, The Wishing Tree was commissioned by the King’s Singers and the BBC for the 2002 Proms, celebrating the present Queen’s Golden Jubilee. Joby Talbot, formerly of The Divine Comedy, was asked to compose a work in which to reflect Queen Elizabeth II’s life, as well as incorporating a 16th century madrigal-element, in reference to the reign of the first Queen Elizabeth.