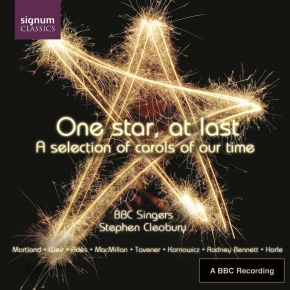 One Star, At Last, A Selection of Carols of Our Ti

When an ensemble like the BBC Singers, renowned for its commitment to the music of our own time, sets out to record a Christmas album you can be sure that the repertoire will include material rather different from the usual run of popular standards and arrangements!

One star at last includes eight new carols (six of them specially-commissioned by BBC Radio 3), several premiere recordings, and a selection of music - serious and light-hearted, contemplative and joyful - by some of the leading British, European and North American choral composers of the day.