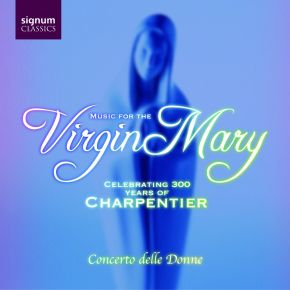 Recorded in the beatiful church of Notre Dame, Rozay-en-Brie, by Concerto Delle Donne, this record celebrates 300 years of Marc-Antoine Charpentier, whose works ranged from simple settings of hymns composed for unaccompanied solo voice to works of great complexity and virtuosity for soloists, double choir and double orchestra. Here, the focus is on the sacred works that Charpentier composed for two and three solo women's voices. The three principal sopranos of of Concerto delle Donne all feature as soloists. Other composers included on this album are Jean-Baptiste Lully, Nicholas-Antoine Lebègue & Guillame-Gabriel Nivers.

Reciting the Divine Office was central to the life of a contemplative nun, and at many convents musical instruction was a regular part of daily life. On major feast-days, it was customary to sing, rather than simply recite, the Offices of Matins and Vespers. Throughout the seventeenth century, there are references to nuns singing the Offices, as well as singing motets during the Mass and at the popular devotional service of Salut (or Benediction). This is witnessed, not only in descriptions from the period, but also in the extensive repertory of sacred music known to have been composed for women’s voices by seventeenth-century composers such as Charpentier, Clérambault, Couperin, Lully and Nivers.

There was a dichotomy in elevated seventeenth-century French society: on the one hand, there was the pomp and ceremony of Court, marked by frivolity and artificiality; on the other hand, there was incredible religious fervour found in the convents and other religious establishments, at which members of Court society spent many hours of each day in pious devotion. These noblewomen balanced the life of luxury and attention to social obligations at Court, with a life of prayer, devotion and service. The Guise princesses, for whom Charpentier worked during the 1670s and 1680s, epitomise the devout noblewoman, fulfilling both their worldly and their religious duties on a daily basis. They were particularly devoted to worship of the Virgin and the Infant Jesus which is reflected in the numerous pieces composed by Charpentier in honour of the Virgin Mary – some of which are recorded here.

The religious practices of convents within Paris differed widely depending on the Order, and this affected the type of music used within the establishment. In keeping with Counter-Reformation ideology, emphasis was placed on devotion to the Blessed Sacrament and the penitential rites, as well as the veneration of saints. Devotion to the Blessed Sacrament was seen in the popular evening service of Salut at which the Host was venerated, and hymns, litanies and motets were sung. Motets were also sung during the services held by the confraternities of the Virgin.