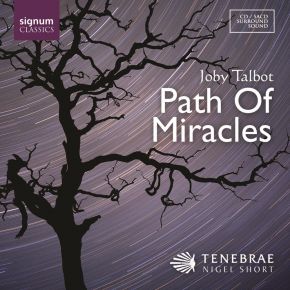 The Path of Miracles

Path of Miracles, for a cappella choir, was commissioned by Tenebrae from Joby Talbot and premiered last year. The work is based on the most enduring route of Catholic pilgrimage - the great Pilgramage to Santiago. The four movements of Path of Miracles are titled with the names of the four main staging posts of the 'Camino Frances':

The 'Camino Frances' s the central axis of a network of pilgrimage routes to Santiago. Talbot's music has been performed by, amongst others, the London Sinfonietta, The BBC Symphony Orchestra, The Brunel Ensemble, Evelyn Glennie and The Duke Quartet. In addtion, Talbot also writes for the big and small screen. Credits include, The League of Gentlemen and The Hitchiker's Guide to the Galaxy.

Tenebrae, founded and directed by former King's Singer Nigel Short, is a professional vocal ensemble, whose motto is passion and precision. Tenebrae has built an impressive reputation for innovative and memorable performances throughout the UK and Europe.

"an evocative odyssey" The Times

"It's an interesting musical journey for composer, performers and listeners alike"  Classic FM

"Joby Talbot has been making quite a name for himself recently. Path of miracles can only add to that reputation: it's a real achievement" International Record Review