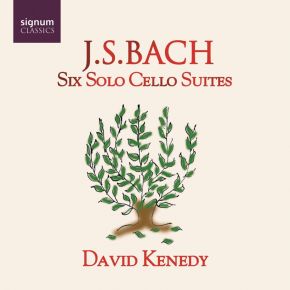 Bach's Solo Cello Suites are unsurpassed masterpieces. depicting a complex universe of spirit, thought and human emotion. The inventiveness, breadth of wisdom and unsurpassed beauty of Bach's intention are represented in this intensely personal new recording by David Kenedy which captures the serenity and profundity of the music, as well as it's joyous expression as Dance.

From both his frequent recitals and broadcasts in both Europe and the USA, David Kenedy has won international acclaim for his prolific work as a chamber musician. As well as being a founder member of the London Mozart Trio, he has twice had the honour of being invited to play in the Jaqueline du Pré Memorial Concerts in Lambeth Palace and the Wigmore Hall. Since 1990 he has been professor of 'cello and Chamber Music at Trinity College of Music, London.

"I thoroughly enjoyed David Kenedy's performances - indeed so taken was I by his innate musicality and his self-evident joy of playing that I listened to the first three Suites straight off, first time around. On my returning to them individually several times, my initial reaction has not changed: I like these performances very much … Throughout this set the overriding impression given is that we are listening to a very musical player whose technique is first-class and whose approach to individual tempos is generally excellent. Kenedy has the measure of this difficult music and I prefer his account to that of a number of other, far more well-known cellists. … In sum, these are most musical and intelligent readings, combining brilliance and elegance with a sincere musical purpose. The recordings are very good indeed and this set is warmly recommended".