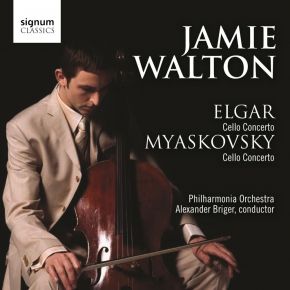 The cello concertos of Elgar and Myaskovsky written in 1919 and 1944 respectively, engender few similarities these days but make an exciting coupling due not only to the disparate nature of the composers’ lives and situations, but also to the common ground they tread; both composers were in their early sixties when writing their main work for the instrument. A stunning performance by Jamie Walton, accompanied by the magnificent Philharmonia Orchestra.

Jamie has enjoyed success as a rising international soloist and has given concerts in some of the most prestigious concert halls in the world. He appears regularly at the Wigmore Hall and Symphony Hall, Birmingham and has performed with leading orchestras such as the Vienna Chamber Orchestra and the Philharmonia Orchestra.