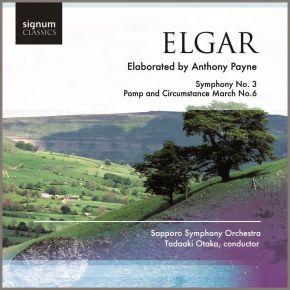 Symphony No. 3  Pomp and Circumstance March No. 6
The Sapporo Symphony Orchestra take on Elgar’s Symphony No.3 under Tadaaki Otaka’s baton with as much flair as they did in their Japanese premiere of the work in 2004.

In 1995 Anthony Payne was commissioned to complete an ‘elaboration’ of the entire symphony and completed Elgar’s original ‘sketches’ of the work in what can be immediately recognised as Elgarian style.

Payne similarly completed Elgar’s Pomp & Circumstance March in 2006, Elgar’s first large orchestral work since the Cello Concerto, pulling out all the stops in a brilliant orchestration. This is only the second recording to be made of this work.

The Japanese orchestra affirm their accolade as one of the finest orchestras in Japan in this stunning performance.

The orchestra has received high praise from critics and public alike, distinguished by its clear sound and dynamic powers of expression.