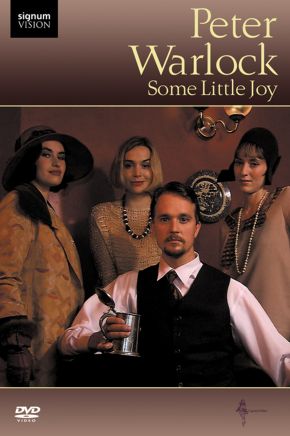 A film about a man who, by his death at thirty six, had composed some of the most perfect gems of English songwriting and elevated hedonism to an art form.

The present day: Two prospective members of the eccentric Peter Warlock Society have arrived at the Antelope, an old fashioned pub in Eaton Terrace London. They are welcomed by members of the society, who introduce them to the story of Philip Heseltine – pen name Peter Warlock.

We go back to the bohemian world of mid twenties England, riotous episodes where Warlock and cronies such as composers Jack Moeran and Lord Berners mix with artists of the magnitude of Augustus John, and folk singer Harry Cox. Warlock’s relationships with women are explored with specific reference to his long time girlfriend Barbara Peache, his exotic ex-wife Puma and spiritual soul mate Winifred Baker. As the roaring twenties race towards their conclusion, Warlock realises that he has to make an attempt to settle down and accept the reality that despite his undoubted genius, the musical elite will never welcome him.

By 1930 he has largely ceased composing, and whilst remaining a monumental thorn in the side of the musical and literary establishment has ceased to be a creative force in his own right. As we come back to the present day the Chairman of the Peter Warlock Society describes Warlock’s suicide to the new recruits - a loose gas tap, an open verdict and the loss of an extraordinary figure who rivalled Purcell as a composer, Shaw as a critic and who elevated hedonism to an art form.