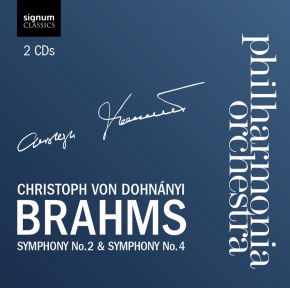 Symphony No. 2
Its idyllic nature, sheer tunefulness and general sunny disposition earned Brahms an unmitigated triumph in its premiere performance in Vienna in 1877. Since then, it has been described as the sunny counterpart to the storm clouds of his First Symphony.

Symphony No. 4
This work conveys Brahms’ imaginative writing combining sheer intelligence with unexpected comic turns. The Finale is still considered to be one of the most exhilarating movements in the entire orchestral repertoire.

The Philharmonia Orchestra is widely recognised as the UK’s finest orchestra with an impressive recording legacy. Christoph Von Dohnányi has been principle conductor for the past 11 years and in the coming season will be made Honorary Conductor for life.