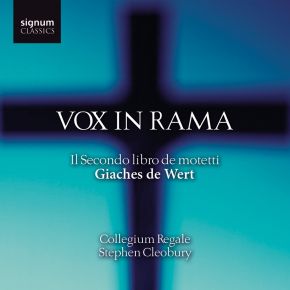 The Flemish-born Giaches de Wert was one of many foreigners to dominate the Italian music scene in the mid to late sixteenth century, therefore to this day his music is largely unknown to many. It is the second of three books of Motets which appears on this disc, written when his skill as a madrigalist had reached its height.

As part of the Kings College Choir, the choral scholars of Collegium Regale perform independently of the choir, singing a repertoire that encompasses 15th Century sacred music, jazz, folksongs and pop. Directed by Kings College’s and the BBC Singer’s renowned director Stephen Cleobury.