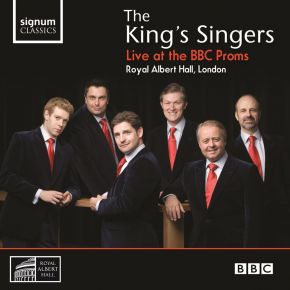 Live at the BBC Proms

The King's Singers celebrate their 40-year anniversary with a live BBC Proms performance from the Royal Albert Hall. This disc demonstrates the skill, flair and versatility you would come to expect from a King's Singers performance, sampling the besrt from their vast repertoire. The King's Singers have maintained their place at the apex of a cappella singing and are amongst the world's elite classical performers.

Following this concert The Daily telegraph said "every edge was bevelled smooth" and the Guardian described it as "flawlessly realised".