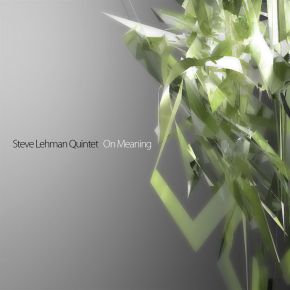 Each of On Meaning’s eight compositions addresses the challenge of creating fresh environments for modern improvisers and advances a unique and meticulously crafted vision of compositional form, harmony, rhythm, and orchestration. “Analog Moment” and “Curse Fraction” focus on the nature of background/foreground binaries, while “On Meaning” and “Haiku d’Etat Transcription” use changing speeds and metric modulations (both temporary and permanent) to challenge the members of Lehman’s quintet to draw from their individual resources in new ways. Other compositions, such as “Great Plains of Algiers”, draws from Lehman’s study of spectral harmony under Tristan Murail at Columbia University, while Open Music layers irrational rhythms and microtonal backgrounds in creating a richly imagined setting for Tyshawn Sorey’s featured drum solo.

Throughout On Meaning, Lehman’s cutting-edge compositional voice is brought to life by his remarkable quintet, featuring performer / improvisers who represent the absolute state-of-the-art on their respective instruments: Drew Gress on bass, Jonathan Finlayson on trumpet, Tyshawn Sorey on drums, and Chris Dingman on vibraphone. Lehman’s own performance, on alto saxophone, bristles with the unique combination of explosiveness and precision that has been his trademark since he burst onto New York’s creative music scene in 2004. Much like the abstract and darkly compelling compositions of On Meaning, Lehmans work as a saxophonist  combining a highly advanced harmonic language, microtonal playing, extended techniques, and a deeply rooted rhythmic sense — positions him, at 28, as one of the most significant voices to emerge in creative music in recent memory.