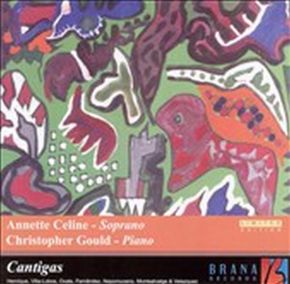 Waldemar Henrique de Costa Pereira (1905 -1995) is one of Brazil’s best-known composers. He was born in Belém, close to where the Amazon meets the Atlantic Ocean.

At the age of 13 he was drawn to the piano and at 18 his song Minha Terra (My Country) became a popular national favourite. In 1929 he left his job in business to seek fame and fortune as a pianist and composer in Rio de Janeiro.

He was an immediate success in radio and publishing and found his niche between the refinement of classical music and the colour and vibrancy of popular folk song.

Henrique spent many years in Rio and was absorbed by the culture there. However, the influence of his homeland in Pará stayed with him during his travels. His compositions continued to reflect the music of his childhood.

Heitor Villa-Lobos and Mário de Andrade advised him to return to his folklore roots, and he fell in love with Pernambuco, maracatus, frevos and cocos.

In 1943 he returned to Belém to become Director of Artistic Culture. In 1949, he visited Europe with his sister Mara under the auspices of Unesco, performing in Paris, Lisbon, Porto, and Madrid. In 1966 he became director of the historic Teatro da Paz em Belém in his hometown.

Waldemar Henrique had many problems with publishers and copyright organizations throughout his career and sadly, gave up trying to have his works published.

In addition to thirteen songs by Waldemar Henrique, Cantigas includes songs by his mentor and advisor Heitor Villa-Lobos (1887 – 1959), probably the best known of all Brazilian composers.

Like Waldemar Henrique, Jaime Ovale (1894 – 1955) was born in Belém in the Amazonian state of Pará. He worked closely with the Brazilian poet Manuel Bandeira and wrote a number of significant works for the Oboe.

Lorenzo Fernandez (1897 – 1948) was born in Rio de Janerio and studied at the National Institute of Music with Francisco Braga, Enrique Oswald and Frederico Birth. A great admirer of the work of Alberto Nepomuceno, he also wrote for opera and symphony orchestra, the latter being the artistic vehicle for perhaps his masterwork Symphonic Variations.

Alberto Nepomuceno (1864 – 1920) was born in Cortaleza and settled in Rio de Janeiro. He played a major role in the development of musical nationalism in Brazil and his vocal works include over fifty songs with Portuguese texts.

Spanish composer and critic Xavier Montsalvatge was born in Gerona in 1912 and studied at the Barcelona Conservatory with Millet, Morera, Costa and Pahissa. His work in the 1940s and 50s included simple operas and songs for children.

Born in 1924, Mexican composer and pianist Consuelo Velazquez is best known for the song Besame mucho, which has become a jazz standard recorded by artists as diverse as Michel Petrucciani and the Beatles.

Brazilian Soprano Annette Celine studied in Milan with Mercedes Llopart and Elvira de Hidalgo and made her European debut at the Teatro Reggio di Parma in a programme of Mozart arias.

In a distinguished career, she has received critical acclaim performing to thousands, with great orchestras, conductors and opera companies and at many the World’s finest venues.

Her love for the music of Brazilian composers such as Villa-Lobos and Henrique has led to her becoming one of the leading performers and interpreters of 20th Century Brazilian song.

Christopher Gould read music at Clare College, Cambridge before winning a scholarship to the Royal Academy of Music, where he studied with John Streets and Malcolm Martineau.

In 1996, he was the first young pianist to receive an award from The Geoffrey Parsons Trust. He is also a recipient of the Gerald Moore Award (1998) and a first prize winner in the Wigmore International Song Competition (2001).

In addition to his work with Annette Celine, Christopher has performed with Sarah Walker, Ann Murray and Geraldine McGreevy at the Wigmore Hall, at the South Bank Centre and on BBC Radio 3.