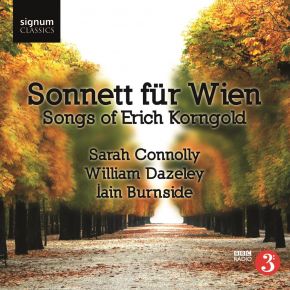 Erich Korngold is perhaps best known as the pioneering émigré composer whose grand orchestral scores defined the sound of film during the golden age of Hollywood. As well as this though, his output for voice in the form of Lieder and Song highlighted the strong bond that Korngold forever held with his homeland and the city of Vienna, a place inextricably linked to the High-Romantic style that Korngold so ably perfected.

This collection of songs and lieder are beautifully performed by Sarah Connolly (mezzo-soprano) and William Dazeley (baritone), accompanied by renowned pianist and broadcaster Iain Burnside.

In a feature for BBC Music Magazine in June 2013, Sarah Connolly picked this disc as her favourite recording, saying:

"We recorded this in the lovely Potton Hall in East Anglia. I was in very fresh voice, and the producer John West was very encouraging and left me to my own devices. But when listened to the playback I couldn't believe how closely miked I sounded - you could hear the formation of consonants, everything. John said 'Don't worry, we've got it in hand, we'll make it sound right.' When listened to the final recording I couldn't believe how clean it sounded. I now use it as an example of how I'd like my voice to sound."